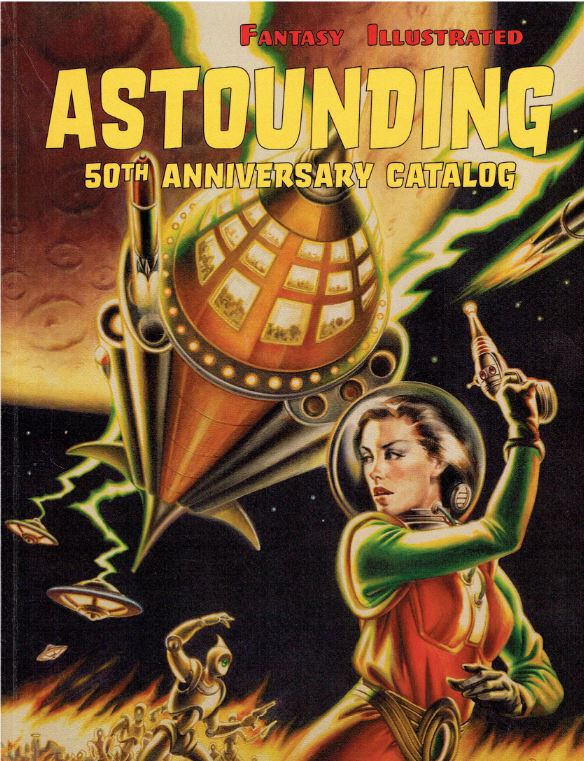 Fantasy Illustrated has issued a new catalogue, an event in itself. It is titled either 50th Anniversary Catalog or Catalog #31. Catalog #30 was published over 20 years ago, in 1999. They don't do this very often. Proprietor Dave Smith explains that with the advent of the internet it no longer made sense to print catalogues. However, this is a special occasion it being a 50th anniversary, and it contains more items than any other catalogue I recall.

Fantasy Illustrated has been in business for 40 years, and Smith has been in the field for 50 years. You won't find much here in the way of classic books if by “classic” you mean Shakespeare or Twain or people like that. However, there are many classics of their genre. Fantasy Illustrated specializes in pulp books, magazines and comics. A few of the writers have made their way into the general consciousness, such as science fiction writers H. P. Lovecraft and Ray Bradbury, mystery writer Philip K. Dick, and Tarzan's daddy Edgar Rice Burroughs. There is even something from L. Ron Hubbard when he was known more as a science fiction writer than as the founder of the Church of Scientology. However, most of what is found in this catalogue will appeal primarily to aficionados of pulp fiction. To say the selection found in this catalogue is extensive would be an understatement. There are books, sets and runs of magazines, and individual copies (lots and lots of these). Here are a few samples of what you will find.

Edgar Rice Burroughs is known to most people for his stories about John Clayton, the Viscount Greystoke (okay, you know him as Tarzan). However, Burroughs was a prolific writer of fantasy and science fiction books, including numerous series. Here is one of those science fiction books: At the Earth's Core. This is a 1962 hard cover edition of a book first published in 1914. The protagonist of this story rides a vehicle that bores its way into the center of the earth, discovering a land called Pellucidar. It is filled with animals extinct on the earth's surface that are part of the evolutionary chain. That includes more primitive humans and a flying reptile that is intelligent and dominant. The humans are slaves. This leads to various dangers and adventures in this strange underworld. Priced at $60.

Next we have a book about Burroughs' best-known character, but he is not in his usual role, swinging through the trees with Jane. He is instead serving with the British Royal Air Force in the Foreign Legion. He is back to using his original name because Tarzan of the Apes would be an odd name for someone in the Air Force. It was Burroughs' last Tarzan book, written three years earlier when the war was still ongoing, explaining why Tarzan was serving in the military. You might think Tarzan in a uniform and an airplane is out of place, but don't worry. His plane was shot down over the jungles of Sumatra, so Tarzan is called on to use the skills developed in his youth to survive. Let Tarzan be Tarzan. The title is Tarzan and the Foreign Legion, published in 1947. This is a really fine copy. $275.

This is the first book by one of the giants of science fiction, Ray Bradbury. The title is Dark Carnival, published in 1947. At the time, Bradbury was strictly a short story writer, and that is what is in this book. It is a compilation of short stories Bradbury had previously published in periodicals along with some new ones. It is stated that 3,000 copies were printed, so publisher Arkham House must have had some confidence in Bradbury's writing. $800.

Robert E. Howard was a prolific fantasy writer during his short life. His name may not be familiar to those who do not follow the genre, but his most famous character undoubtedly is - Conan the Barbarian. Howard published in many magazines and newspapers, particularly Weird Tales. After a few years of occasional publications, he began to find regular success with his stories at age 23. It would be several more years before Conan made his appearance. Offered is Conan the Conqueror, a proof copy of the first British edition of 1954, which came many years after his death. Howard committed suicide at the age of 30 as his mother lay dying of tuberculosis. $2,000.

A pulp science fiction magazine that put together a decent run was called Planet Stories. The stories took place on alien planets or in interstellar space. The issues always featured dramatic cover scenes expected for the genre, with horrible alien creatures, warrior men and space suits, and, of course, scantily clad women. Men may have needed heavy space suits to survive in outer space, but not women. Along the way, they had contributions from several great writers in the field, notably Ray Bradbury, but also Leigh Brackett, Edmond Hamilton, Frederic Brown, and the first published work by Phillip K. Dick. Planet Stories first appeared in 1939 and continued until 1955, 71 issues in all, each of which is part of this complete run. $5,500.

This pulp aviation adventure magazine had three incarnations. In the first, 19 issues from 1932-1934, it was known as Battle Birds. Starting in 1934, the title was changed to Dusty Ayres and His Battle Birds. After 12 issues, that shut down. Four years later in 1940, it was restarted under the original Battle Birds name and ran for another 26 issues before closing for good. Originally it was more aviation adventure, but under the command of Dusty Ayres, it introduced more fantastic weaponry that moved it deeper into sci fi. When it returned in 1940, it was back to more traditional warfare, fitting in with the actual warfare then taking place. Offered is a complete run of the 12 issues of the middle incarnation, Dusty Ayres and His Battle Birds. $3,500.

Fantasy Illustrated may be reached at 425-750-4513 or rocketbat@msn.com. Their website is found at www.FantasyIllustrated.net.