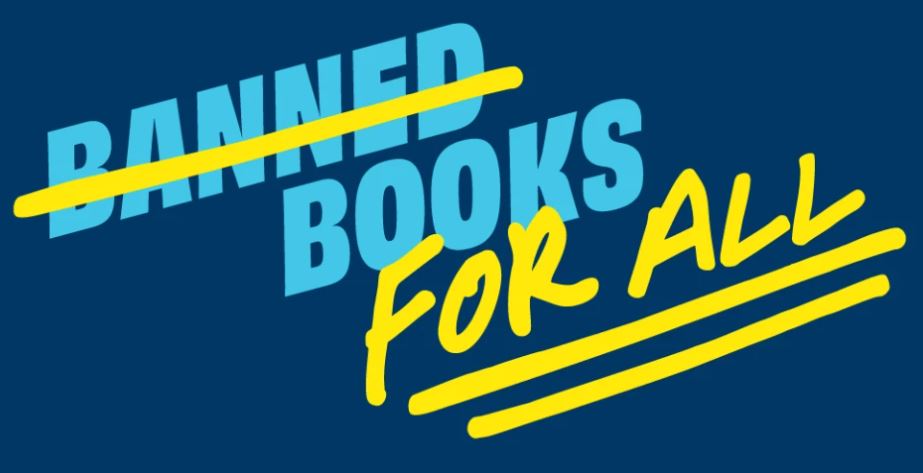 Banned Books Books For All.

The long arm of censorship has been bearing down on America in ways I've not seen in all my (many) years. Books are being banned from public and school libraries not just on typical obscenity grounds, but because of topics such as race, history, and LGBTQ concerns. Sometimes, the justification given is to spare young people from feeling guilty for things others have done before them, not for their own wrongs.

This growing censorship has not escaped the notice of the New York Public Library. It has taken action to counter the censorship with a program called “Books For All,” though it may be mostly symbolic. With the cooperation of publishers Hachette, Macmillan, and Scholastic, they are offering free access to four books that have been banned in some places. The books are available to anyone. You don't have to be a member of the NYPL or a resident of New York. As they are electronic copies, anyone can get them from anywhere. They are free – no charges, no late fees. All you need is NYPL's SimplyE app, available from Google Play and the Apple App Store.

The four books are Speak by Laurie Halse Anderson, King and the Dragonflies by Kacen Callender, Stamped: Racism, Antiracism, and You by Jason Reynolds and Ibram X. Kendi, and The Catcher in the Rye by J. D. Salinger. I will admit to having read only one of these, The Catcher in the Rye. I am guessing language is the issue as nothing else jumps out. A few libraries banned it when it came out in 1951 for this reason, but today? Holden Caulfield's language was a bit improper for 1951 but kids these days talk more coarsely all the time among themselves. Nothing Caulfield said is going to shock them, nor their parents either.

I don't know what the others are about but the one about racism seems obvious. Is talking about racism a problem? Are we better off pretending it doesn't exist? Will this make it go away? Will the bad parts of our history – slavery, segregation, lynching, mistreatment of Native Americans and of immigrants from “No Irish Need Apply” to the No-Nothing Party, never have happened if we pretend they didn't?

It made me wonder what they do in Germany. Do they ban mention of the Nazis, the concentration camps, the crematoriums, the Holocaust, similar to the way Russia forbids mention of the killings and war crimes in Ukraine? I don't think so, though it's not a feel-good story for the children. Isn't knowing about the bad the way to prevent it from happening in the future? Those who do not learn from history are doomed to repeat it. Sometimes I wonder whether those who seek to prevent the young from knowing about the bad parts of our history are less interested in protecting their tender ears than in wanting us to continue those terrible practices.