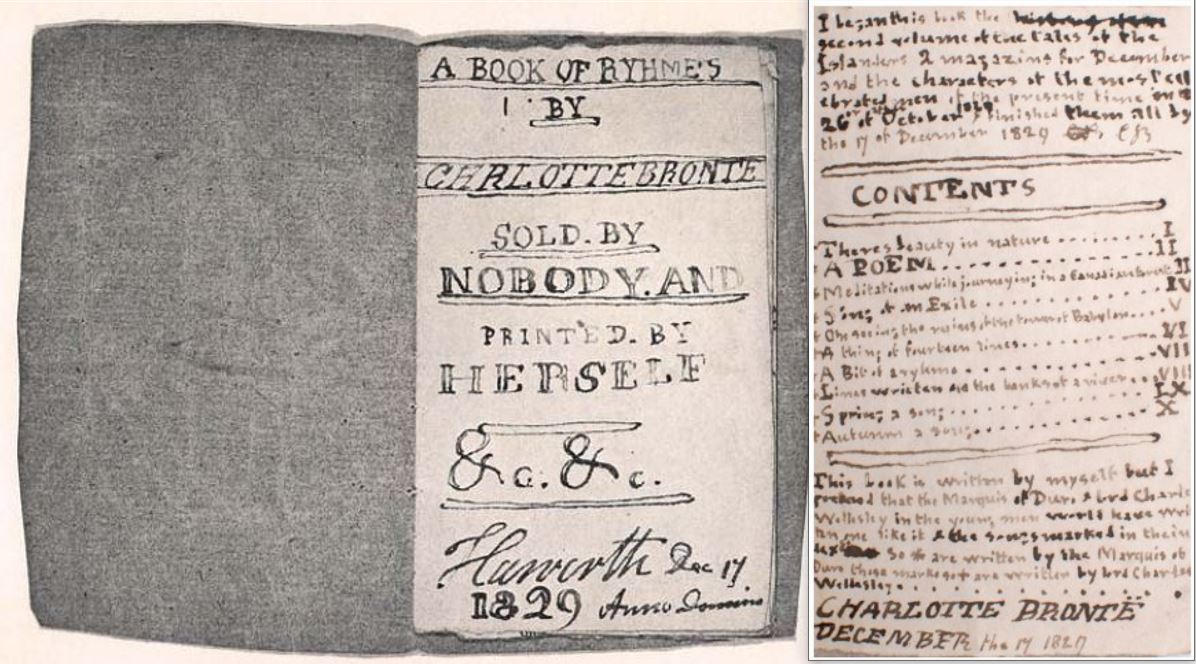 Booksellers James Cummins of New York and Maggs Bros. of London have come up with one of the more significant literary finds in recent memory. It is a hand-written miniature volume by Charlotte Bronte when she was just 13 years old. It is dated 1829, almost two decades before she and her sisters suddenly burst on the scene as some of the great writers of the century. It contains ten poems written on 15 pages of a book no larger than a playing card. As Miss Bronte described it, it is “A Book of Ryhmes by Chrlotte Bronte, Sold by Nobody, and Printed by Herself.” The original spelling of her name and “rhymes,” like the poems, are all hers.

The Bronte children were writers long before they became serious authors. Sisters Charlotte, Emily, Anne, and brother Patrick invented an imaginary world around them. Their mother died when they were young, leading to their becoming very close. In 1826, their father brought home some toy soldiers for Patrick, but the sisters generously shared his prize. They invented an imaginary place for them called “Glass Town.” From there, the children's imaginations ran wild, which led to their poems, stories, and a magazine, all “published” among themselves alone.

Charlotte explains her work like this: “This book is written by myself but I pretend that the Marquis of Duro & Lord Charles Wellesley in the Young Men's World have written one like it, & the Songs marked in the Index so * are written by the Marquis of Duro and those marked so † are written by Lord Charles Wellesley.” She modestly notes, “The following are attempts at rhyming of an inferior nature it must be acknowledged but they are nevertheless my best.”

Cummins and Maggs explain, “This close, enchanted world of their childish imaginations fed into the creation of some of the most famous and popular novels ever written, including Charlotte’s Jane Eyre; Emily’s Wuthering Heights; and Anne’s Agnes Grey and The Tenant of Wildfell Hall. These were issued pseudonymously by London publishers in quick succession from 1847 to 1849 and are now acclaimed as classics of nineteenth-century literature. The miniature manuscripts were put away, but were known to Charlotte’s biographer Mrs. Gaskell. Beginning in the 1890s, the manuscripts were sold to collectors in Britain and America. This manuscript was sold at the dispersal of the effects of the second wife of Rev. A.B. Nicholls, whose first wife was Charlotte Brontë. A BOOK OF RYHMES was last seen in public in New York in November 1916.”

The Nicholls' sale took place at Sotheby's in 1914. It was back on the market two years later when it sold at Walpole Galleries on November 17, 1916. That was the sale of “Rare Books, Letters and MSS. Including many books from the Library of the late WILLIAM MATTHEWS Noted American Binder with Masterpieces of His Work.” However, it wasn't part of Matthews' library as he died in 1896. We don't know who was owner for those two years. Nor do we know where it has been in the years after it “was last seen in public” in 1916. Cummins and Maggs have not revealed who the most recent owner is.

Charlotte Bronte wrote several such miniature books in her childhood. Another sold at Sotheby's in 2019 for £690,000, the equivalent of $1,070,000. This book last sold for $520 at Walpole, but that was 1916 and both dollars themselves, and items created by the Bronte sisters have appreciated enormously in the last century-plus.

The book will be on display at the New York Antiquarian Book Fair on Thursday April 21 at the booth of James Cummins Bookseller.

The book was featured as the lead in the New York Times Arts & Leisure section on March 30. Here is a link: www.nytimes.com/2022/03/30/arts/charlotte-bronte-book-discovery.html

Subscribers to the Rare Book Transaction History (signed in) will find the Walpole Galleries sales listing at the following link: www.rarebookhub.com/book_records/7962757