Back from the Brink: The Trial of Episcopacy 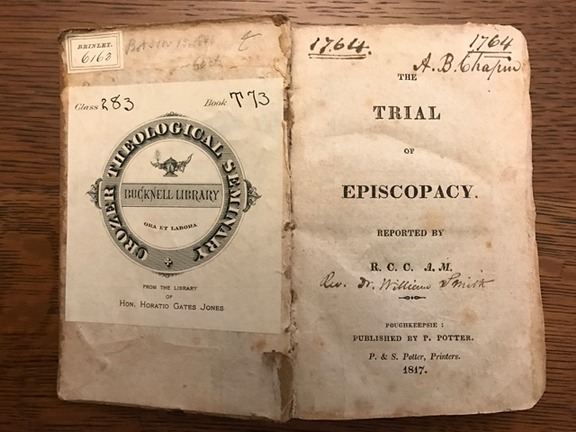 It is becoming easier to trace the history of specific copies

I recently purchased a copy of The Trial of Episcopacy printed in Poughkeepsie, New York in 1817.  There is no author as such but in the author’s place it reads Reported by R. C. C., A. M. [in pencil noted “otherwise known to be Reverend Dr. William Smith”].  This book was posted on eBay with minimal description and a parenthetical notation that the author is actually John Reed.  It was interesting.

Here is the listing:

An 1817 4 x 6 inch leather hard cover printing from P. & S. Potter in Poughkeepsie, NY in acceptable condition with library marks, no front free endpaper, weak hinges, chips and tears in spine cover, no marks in text pages, 200 pages.  Author was the Rector of Christ's Church in Poughkeepsie, NY and wrote this as the recorder of a fictional meeting of representatives of the major religions discussing aspects of their religions. An apology for the Episcopal Church.

Two images provided show a harried binding and the title and facing page.  Not described but visible on one image is the page that prompts this story, the page facing the title.  It make me wonder about its history.

There are two bookplates.  The older of the two is the modest but important “Brinley” marker with shelf number, 6163.  The other is a bookplate that reads:

Brinley is George Brinley, an important 19th century book collector.  Here is the description of him found in the Dictionary of American Book Collectors authored by Donald C. Dickinson [1986).

“After spending his early years in Boston, Brinley moved to Hartford, Connecticut, where he established himself as an important landowner.  He was a shrewd farmer, a domineering parent, and an avid bibliophile.  By the time he was twenty-eight, Brinley had secured a large collection of American Indian materials owned by Boston bookseller Samuel G. Drake.  Eight days before an announced auction, Brinley made private arrangements with Drake and took the entire lot.  At the same time, he was buying energetically from the John Pickering* and Gabriel Furman** sales.   Outside the auction rooms, his collecting techniques were original and effective.  He found numerous rare pamphlets in the “waste paper” that had been turned over to paper mills for processing, and he also made a habit of travelling the back roads of New England in his buggy, trading pots and pans for books.  Never one to limit himself to a single mode of supply, Brinley engaged the enterprising Henry Stevens of London to act as his agent for Americana as it appeared on the British book market.  Since Stevens had already established business relations with John Carter Brown and James Lenox, two very energetic and knowledgeable collectors, Brinley’s position was less than advantageous.  In a number of cases, however, Brinley was able to secure fine items in spite of the competition.  After Lenox and Brown had both refused John Winthrop’s signed copy of the 1645 Declaration of Former Passages and Proceedings Betwixt the English and the Narrow-gansets, Brinley bought it for $50,  When Lenox eventually decided it was worth owning, he had to pay four times the original price at the Brinley sale.  The most dramatic instance of Brinley’s intelligent book-scouting came with his purchase of more than 275 choice examples of the writing of Richard, Increase, and Cotton Mather from Stevens after they had been refused by Brown, Lenox, and the British Museum.  When the British Museum turned down a copy of the Bay Psalm Book, Brinley was quick to pick it up, although he called it a “dirty little book.”  In 1873 Stevens capped all his other transactions with Brinley by selling him the Erfurt copy of the Gutenberg Bible.  In addition to these high points, Brinley held remarkable runs of early almanacs and colonial histories.  Although he favored materials that dealt with the Northeast, he built sound holdings on the South, the Old Northwest, and Mexico, all of which gave his library breadth and importance.”

The distribution of the Brinley library, at what has been referred to as the first great book sale* in America, took place in New York from March 10, 1879, continuing in several sessions until April 1893.  The catalog, carefully prepared by Brinley’s old friend and bibliographic consultant James H. Trumbull, furnished a rich fare.  Returns were excellent, with the Mather items bringing particularly high returns.  At the third sale, Hamilton Cole bought the Gutenberg Bible for $8,000, with Brayton Ives as under bidder.  It was a moment to remember.  In an unusual directive, Brinley provided five historical societies and libraries with a $5,000*** credit to be used against purchases in the sale.  This generous act enabled the chosen institutions to make a number of significant purchases that otherwise would have been beyond their means.  Brinley’s reputation as a collector rests on his thorough understanding of Americana and his energy in obtaining important items.  In Robert Roden’s Cambridge Press 1639-1692, several rare tracts were annotated with the comment “Even Brinley could not find a copy.”  These notes stand as an appropriate compliment to one of America’s greatest collectors.”

Mr. Brinley had some great books including a Gutenberg Bible.  His Gutenberg brought $8,000 in 1881, The Trial of Episcopacy $0.60 cents.  The next Gutenberg, assuming it’s complete in an early binding, should bring $50,000,000 and by inference “The Trial…” $3,250 but perhaps not.  For starters, there are 49 identified Gutenbergs worldwide.  The Trial is incomparably more rare although it takes a second look in the OCLC to see it.  The Poughkeepsie edition of The Trial of Episcopacy is found in many libraries but it turns out most are eCopies.  It in fact appears there is fewer than half the number of the almost-too-common Gutenberg Bible.  So perhaps the eBay copy is worth more than $3,250.

The recent seller, Better World Books, didn’t think so.  They priced their copy to start at $4.95.  I placed a bid as the lot was expiring and bought it for the starting price.

Once I received it I researched its Crozer Theological Seminary bookplate that contains the following “From the Library of Hon. Horatio Gates Jones,” a Pennsylvania lawyer whose father, the Reverend David Jones, was a storied participant in the Revolutionary War.

Mr. Jones [the younger] would pass away in 1893 and sometime after [but by 1920] find that this copy of the Trial of Episcopacy bearing his identification had been gifted to the Crozer Theological Seminary, an institution Mr. Jones served as Board Secretary.

Some forty years later the Crozer Theological Seminary merged with another Baptist Seminary.

That institution, the Colgate Rochester Crozer Divinity School, would themselves disperse their valuable books in the following decades and in 2005 ask David Szewczyk and Cynthia Buffington of Philadelphia Rare Books & Manuscripts for help to sell the rest.  While some would go to auction, others including this one, would apparently be lotted and sold.  As to what was paid it’s unknown as the number of books disposed was enormous and the price received modest.

A decade later this book was tiptoeing toward oblivion, its passage unknown but its destination determined:  Better World Books where, as one of the tens of thousands of books they convert each year from ink and paper to money to be used for charitable purposes, posted it on eBay where I bought it for $4.95.

As to how Mr. Brinley came by his copy the mystery may be resolved by a careful reading of his private papers now held by the Connecticut Historical Society.  These papers haven’t yet been digitized but they are open for inspection [by request].

In the mean time two sales Mr. Brinley bought at have been identified and I expect, when we locate them, that they will be added to the RBH Transaction Database.  They are:

Perhaps among the lots we’ll find The Trial of Episcopacy.

So there you have it.    Today the Gutenberg is worshipped and the Trial of Episcopacy mostly forgotten.  But it turns out that even modest books have their histories.  It makes the field great fun.