A $5 Million Photograph, Purchased for $2 in an Antique Shop 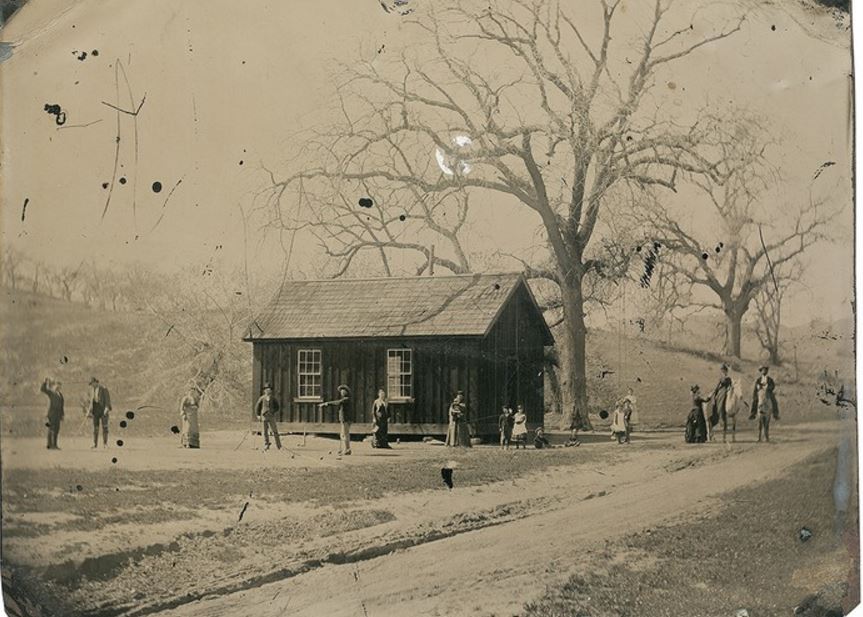 Billy (fourth from left) and friends on Tunstall's ranch?

Miracles do still happen. Collectors scour yard sales, estate sales, auctions, eBay, unappreciated items in dealer inventories, hoping to find that gem lost among the rubble. One such collector may have made such a find in the works on paper field. Randy Guijarro, of Fremont, California, discovered three old photographs in a Fresno area "memorabilia shop" five years ago that he liked. He bought them for $2. He now has an appraisal for $5 million on one of them.

The photograph shows a group of 15 people milling around a small building playing croquet. The photo and their dress imply a likely second half of the 19th century date. The area is slightly hilly, the climate evidently dry. The photograph is not identified. It is certainly worth $2, but why is it estimated at $5 million? The answer is that Mr. Guijarro believes that one of those 15 people is the legendary outlaw Billy The Kid. Now, Kagin's, an appraiser and seller (traditionally a coin specialist but a firm that opened a Western Americana division a decade ago) has authenticated his claim. We need to point out that not everyone agrees with Kagan's evaluation, but the firm did extensive research before reaching its conclusion. They have secured a $5 million insurance policy on the photo.

A photograph of Billy The Kid is, as Kagan's has said, the "Holy Grail" of Western Americana. It is because The Kid is probably the most storied of western outlaws, and there is just one other photograph known to be of him. That was sold at auction in 2010 for $2.3 million. That is an individual photograph taken of Billy standing with his rifle by his side. In this one, he is shown leaning on a croquet mallet, with a group of people believed to be his friends, some being fellow "Regulators" with whom he rode during New Mexico's Lincoln County War.

To better understand the picture, we need to examine the "career" of William Bonney (actually McCarty) that brought him to this time and place. Billy was born in 1859, many believe, in of all places, New York City. His family moved on to Kansas when he was a boy. By the 1870's, they were living in New Mexico, where Billy would make his mark. Young men in the West needed to find work early, so the teenage Billy found work as a ranch hand. He soon found a more lucrative career was stealing horses off of ranches. He joined up with some fellow rustlers in Arizona, and killed his first man when he was 17. He figured his safety required he get out of Arizona, so Billy returned to New Mexico in 1877.

After a brief stint rustling after his return, Billy moved on to Lincoln County. He hooked up with some men who had been hired by John Tunstall. Tunstall was an English immigrant who sought to make his fortune in the West. He already had a substantial head start – his father's money. He went into competition against a group known as the "House." The House controlled business and ranching interests in Lincoln County and did not welcome Tunstall's competition. They shot him dead.

Billy is a controversial figure. His negatives include his rustling and numerous killings, not generally considered good characteristics. However, he did have his bright side. He was sympathetic to the downtrodden. He was particularly friendly to poor Hispanics, having had several Mexican girlfriends and speaking Spanish fluently. He was not the crazy, violent tempered young man he is sometimes portrayed to be, but apparently an easy-going person with a winning personality and sense of humor. Most of all, he was intensely loyal to those who treated him well. Tunstall hired Billy and his friends to drive and guard his cattle, and the loyal Billy remained grateful to his employer, even after he was shot.

When Tunstall was killed by the House in 1878, Billy and his friends vowed revenge. They formed a group known as the "Regulators," and they were deputized to bring Tunstall's killers to justice. However, this was the Old West, and the Regulators were soon conducting justice with their guns. All out war broke out between the two factions. The Sheriff took sides with the established House, so the Regulators performed justice on him. Each side had its adherents, while the sensible people of Lincoln County kept their distance. In time, the state and other powerful forces would assist the established powers, and the fight turned against the Regulators. Billy seemed to have a deal to be pardoned, but authorities went back on it. He was captured, tried for the Sheriff's killing, and sentenced to be hanged. He escaped, killing two guards in the process. A few months later, the new Sheriff, Pat Garrett, tracked him down and shot an unsuspecting Billy in the dark. Garrett did much to build the legend of Billy the Kid, as by building up the Kid's reputation, Garrett hoped to build his own as the man who killed him.