Master Adam, Craftsman-Poet: If I had a hammer... 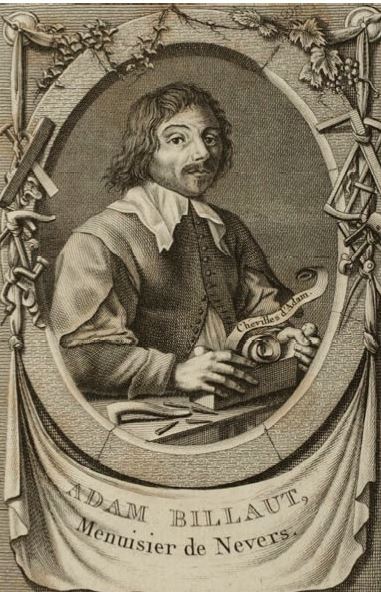 If I had a hammer, or rather a brace, I would write verses to add my humble kingpin to the magnificent work of poetry—just like Master Adam Billaut did. In the 17th century, this carpenter-poet from Nevers, France, though deprived of all literary education, as Voltaire put it, turned poet in his workshop. But he was born a commoner in 1602, and was then reduced to create verses in the middle of his tools and bottles, to quote Chaudon’s Dictionary (Lyon, 1804). This situation lasted until he was 32; then he met the Abbot of Marolles who read his verses to the Duchess of Nevers, and then decided to promote them. “I was more than willing to expose his poems to the public who would undoubtedly like them as much as I did. The following year he came to Paris where he became acquainted with many people of quality,” wrote the Abbot. Mr. Adam’s life changed for the better—but during the Grand Siècle, a leopard couldn’t change its spots, or a commoner turn a respectable poet.

From Nevers to Paris

Adam Billaut came to Paris where he eventually became a relative of Saint-Amand who introduced him to several literary salons. The court soon grew infatuated with this carpenter who prided himself on writing verses. Adam got some recognition but could never rise above the rank of burlesque or Bacchic writer. As a matter of fact, noticing he had afterwards sunk into oblivion, the 1731 edition of Moreri’s Dictionary underlined: “It was quite inevitable for an author of his rank.” Adam used his social position as a selling point, entitling his first collection of poems-The Kingpins—and got trapped. But he was probably ready to endure a certain amount of mockery, or humiliation, to finally get the recognition he wished for.

In The Kingpins, he sought the Approbation of the Parnassus and published a hundred pages of dedicatory epistles from various poets. “He loved praises, and begged for dedicatory verses,” read Moreri’s Dictionary. “Everyone complied, and those who couldn’t write them had them written by friends.” Most of them were just basic plays on words about his ambivalent condition. Saint-Amand, his mentor, wrote he could build verses as well as furniture; Scarron said he was writing verses with a plane-pushing hand. Corneille, Benserade or Quinet were among the numerous writers who said a silly word about this silly work—Mr. Scudery even wondered whether he was a genius or a monster. The then famous painter Mr. Chauveau drew the portrait of the author that was added as a frontispiece to the first edition of The Kingpins (in-4°, chez Quinet—1644). A few months later, every one in Paris was singing along his song As soon as the light comes back to gild our hills—his most popular piece of work ever. “It is said,” continued Moreri’s Dictionary, “that he obtained a pension from Monsieur Duke of Orléans, Gaston Jean-Baptiste.” He became a curiosity at court where he was called the planing Virgil, and even ventured into politics. Indeed, in 1651, he published a Mazarinade—a text against Cardinal Mazarin—entitled Le Claquet de la Fronde, as well as an epigram on the same topic. “These pieces that brought nothing to his reputation,” underlined C. Moreau in his Bibliographie des Mazarinades (Paris, 1850), “were first re-published in the 1840 edition of his works.”

When I first came across Adam’s works, I thought it was a joke—or a literary fraud. A craftsman-poet from the 17th century who entitled his works The Kingpins or The Plane? Come on... History recalls a few working-poets, though; such as Burns, a peasant; Hans Sacks, a shoemaker; or a pastry cook from the same period, who even stated that Adam’s works made more noise, but that his own were more fiery. They were the first working-artists in a time when education was the privilege of a few, and when birth was of the utmost importance. To come from a dignified family would place you above the rest, and insure you respect and privileges. To come from the rabble, on the contrary, made a vulgar man out of you; not even good verses could save you from such damnation. No doubt these working-artists were regularly mocked and made fun at in society. Furthermore, Adam could be trivial at times. As a matter of fact, Jean Pinet, who published his complete works in 1842, cut off the incriminating passages to print them separately. Adam wrote about wine and its consequences, about farting too; some asses and whores would also pop up every now and then. Worse, some of his poems lacked polishing—or should we say planing? Ferdinand Denis, who wrote the Biographic and literary notice of the Pinet edition, blamed it on the lack of time. Several persons of quality including Richelieu and the Prince of Condé generously promised Adam a pension—but talk is cheap, and most of these pensions were never honoured. Therefore, Adam was reduced to earning a living as a carpenter.

Some of his poems also happened to be boring—mostly those never-ending flattering epistles from his second collection, The Brace. “Among a lot of dull verses, we find a few happy lines,” stated Chaudon. Moreri’s Dictionary added: “His works did good to him, but can’t make him a good poet.” In 1842, mentalities had evolved regarding working-artists, and Ferdinand Denis justified the author: “The centuries have been misled; Voltaire himself saw in Master Adam nothing but a cabaret poet (...). But we must speak up now! To say that Adam Billaut was a disheartened poet with elevated thoughts (...) who was forced to sing Bacchic songs, and to liven up some noisy orgies where, a miserable host, he excited both mockery and admiration.” But Master Adam genuinely enjoyed the cabaret, as confessed to a Lord who complained of his not attending his dinners: “In this place (...) everything pleases my belly, / Here I despise war heartily, / And the bottom of a whore / Ain’t worth a glass of liquor.” There was something melancholic about him too—probably since the death of his beloved mother. “Ever since the sad and fateful hour, / When the messenger of despair came to tell me: (...) Your mother has died from the plague, / I haven’t stopped sighing, I haven’t stopped crying.” Death is omnipresent in his poems, and he had morbid images reminiscent of the poetry of the middle age. He was far from the fashionable love epigrams of the time—he knew it, and didn’t care. Ronsard was his model, but he saw a rose withering with tenderness, if not with pleasure: “Even though you are but a withered flower, / How happy I am, proud Rose / To see these changes chasing my rivals away forever.”

Adam’s favour only lasted for a time. He was in an uncomfortable position, so he walked away and came back to Nevers. As Chaudon put it: “He stuck to mediocrity to preserve his happiness.” In his dictionary, Pierre Bayle wrote he was then living in poverty, which sounds quite exaggerated as his protector, Marie de Gonzague, appointed him bailiff of the court of accounts of the Nivernais before she left for Poland. The Duke of Nevers, from his part, graciously sheltered him until his death in 1662—Mr. Adam’s house still stands today.