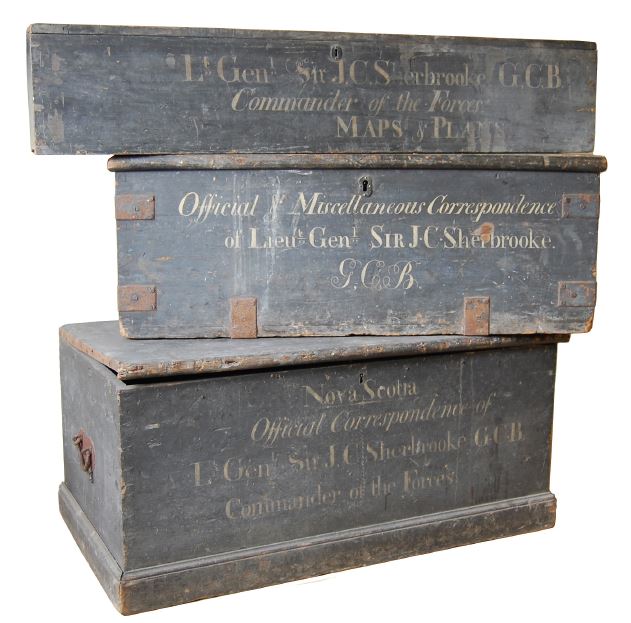 Part of the Sherbrooke Archive, courtesy of Bonham's.

That Canada would want this item for its archives is not surprising. That it would chase it to wherever the bidding went might be surprising to Americans or the British. Events that play a small role in British and American history sometimes loom much larger in the memory of Canada. Ironically, this pertained to a British-American dispute, one little related to Canada. Canada played a role only because it got stuck in the middle.


The item was an archive of material that belonged to Sir John Coape Sherbrooke. Sherbrooke was essentially a soldier, but he was so good at what he did that he was rewarded with important governmental positions, first as Lieutenant-Governor of Nova Scotia and later as Governor General of British North America.


Sherbrooke's first position in Canada was served during the War of 1812. This lot consisted of numerous items of correspondence, notes, and maps prepared by or for him during this war. One of Sherbrooke's accomplishments was the seizing of territory in the state of Maine north and east of the Penobscot River. For the better part of a year, half of Maine became the Canadian province of New Ireland. It was returned in the treaty following the war. After the war, Sherbrooke received his appointment as Governor General, but poor health led him to resign two years later. He returned to England, presumably with this collection of papers in tow. They remained in the possession of his family until last month's auction.


James Moore, Minister of Canadian Heritage and Official Languages, issued a statement saying “Our Government is proud to have acquired this one-of-a-kind original collection of our documentary heritage on behalf of all Canadians. Canada would not exist had the American invasion of 1812–1814 not been repelled; for that reason, the War of 1812 was a defining chapter in our history.” The Americans and British may scratch their heads at this. The War of 1812 was a “defining moment?” Canada would not exist but for it? This was a war between America and England, but neither of the participants see this as much more than a blip on the screen of history. Neither side has much interest in remembering. The 200th anniversary passed last year with little fanfare in America. There was probably even less in England where a much more important war, that against Napoleon, was taking place at the same time. Why is this war so celebrated in Canada, which was essentially an innocent bystander, a participant only because of the misfortune of being located in the wrong place at the wrong time?


England's war against Napoleon's France served to ignite this war against America, but it had been brewing for two decades. Through much of this period, America was on the brink of war with both England and France. Perhaps all that kept America out of war was trying to figure out which of the European powers it wanted to fight. Both interfered with America's free trade at sea as each attempted to blockade shipments to the other's ports. America asserted its right to trade with whomever it chose. However, the British presence in Canada (still a British colony at the time), and their occasional support of Indians who harassed American settlers in the Midwest, made them a bit more annoying. Additionally, there was one other factor that was really galling to the Americans – impressment of seamen. The British would stop American merchants ships and seize sailors it determined were somehow or other really English and impress them into the Royal Navy. This was a long running terrible affront to America. The problem was America couldn't do a thing about it. Its navy was miniscule; the British navy the most powerful in the world.


This, then, was the dilemma America faced when it determined it could take no more and had to strike back. It could not stop the impressments without a larger navy. Nor could America attack Britain, an ocean away, without a navy to get there. What could America do? There was only one answer. Attack and seize part of the British colony of Canada. If they could do that, the Americans reasoned, the British would leave them alone to get their territory back. So, America attacked Canada, though it had no dispute with the Canadians, just their colonial rulers.


Canadians have not always been the most united of people. Every so often French Canadians speak of breaking off from their English-speaking counterparts. In 1812, not only were there English and French Canadians, but independence-minded Indians and British colonial rulers. Whatever could keep so diverse a group together? The answers is... Americans. Canadians have always kept a wary eye on their larger neighbor to the south. America has had an expansionist reputation in the eyes of others, if not in the eyes of Americans. Sometimes it has grown through war, sometimes through treaty, other times through purchases. Indian lands were captured mainly by force, Florida through treaty, Louisiana and Alaska through purchase, Texas and the American Southwest through war. In the 1840s, many Americans sought to claim much of what is today western Canada through war. The slogan “54 40 or fight” during the Oregon boundary dispute called for a border far north of what exists today. Perhaps this would have come about but President Polk was more interested in seizing land from Mexico at the time and could not afford wars on two fronts. He chose to grab the beaches of Southern California over the snow fields of northern Alberta. Polk didn't realize Alberta had the oil.


The result was that the Canadians united to keep the Americans out. That was the one thing they could agree upon. The battle went back and forth. A couple of times, the Canadians were able to seize Detroit, then a fort. At other times, the Americans grabbed parts of Canada. Sherbrooke took half of Maine. Each side had its victories and defeats. Once the war ended in Europe and England could concentrate more forces on America, they were able to attack Washington, burning down the White House and other structures. America held at Baltimore, earning a national anthem as a bonus. America's greatest victory came after the war officially ended in the Battle of New Orleans. Communications of the war's end were very slow in reaching troops in the field in those days. That battle gave America Andrew Jackson, and historians will undoubtedly debate a long time whether that was more a positive or a negative.


As the battles in Europe wound down, the pointlessness of the War of 1812 became ever more apparent. England no longer needed to blockade France nor needed to impress foreign seamen to serve in their navy. What was the point of fighting over these issues any longer? The two sides sat down at the peace table and agreed to essentially return everything to the status quo before the war. Each side removed their troops from the other's territory. The English did not officially agree to stop impressing American seamen, but in practice they did stop. England got nothing out of the war, but with the end of war in Europe, no longer needed to get anything. America got a national anthem no one can sing, but not much else. Canada, however, the innocent bystander with no chips in this war, was the only party to achieve anything. As Mr. Moore observed in his statement, Canada obtained its nationhood as a result of this war. Perhaps some will see this as a bit of an exaggeration. America was not looking to seize Canadian territory. Meanwhile, Canada remained a colony, not an independent state, for many more years. Nonetheless, Canadians get to write their own history, and if they say the War of 1812 is what created the nation of Canada, that is their right.