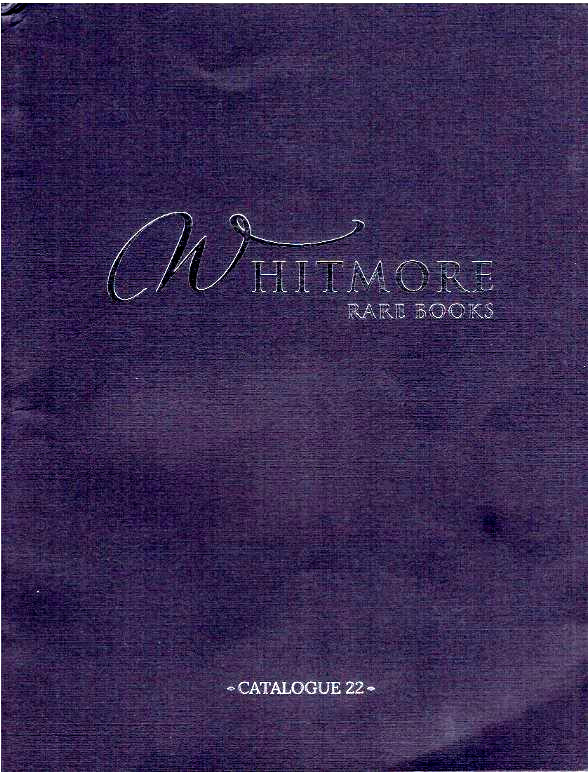 Whitmore Rare Books has issued their Catalogue 22. Whitmore offers a selection of fine books – literary and historical classics. Even the occasional children's book is a classic of its genre. Their books are intended for collectors at the highest level, first or significant editions of important books. These are a few.

We might as well start with Dr. Seuss since he has suddenly become very controversial. Who would have thought that? Recently, Dr. Seuss Enterprises announced that it would no longer publish six of his books. There are some racially or ethnically insensitive illustrations and a few words, though they were written 60-80 years ago when sensibilities were different. Fortunately, this book, his most popular, is not on the list though some claim the Cat with his top hat and bow tie depicts a character from a minstrel show. Come on! Kids love The Cat in the Hat as well they should. I loved this book long before I cared a bit for Shakespeare. Whitmore has a near fine copy of the 1957 first edition, which I may have once had too but that was long ago. Dr. Seuss' books have been credited with turning a generation or more of children with no interest in books into avid readers. He was that good. Item 17. Priced at $3,500.

This item is kind of the opposite of Dr. Seuss. It was highly controversial in its time, but not so much (hopefully) today. It is the four-page Declaration of Rights of Women of the United States. It was Prepared by Susan B. Anthony, Elizabeth Cady Stanton, Lucretia Mott and others from the National Woman Suffrage Association. The timing was perfect. It was published on July 4, 1876, exactly 100 years after the Declaration of Independence. It seemed to them that a century was long enough for women to wait to get their equal rights too, but it would still be almost another half century before they got the right to vote, and some aspects of equality, such as equal pay, are still often lacking. Their Declaration points to the many constitutional protections, most notably the right to vote, denied women simply because of their sex. It concludes, “We ask of our rulers, at this hour, no special favors, no special privileges, no special legislation. We ask justice, we ask equality, we ask that all the civil and political rights that belong to citizens of the United States, be guaranteed to us and our daughters forever.” They had planned to present their demands at the centennial celebration in Philadelphia but were denied the right to speak. At the end of the reading of the Declaration of Independence, Susan Anthony rose, handed their Declaration to the speaker, and then Anthony read it aloud to the surprised audience. Whitmore notes that only 12 copies of the first printing are known to still exist with the other 11 being held by institutions. Item 73. $45,000.

This next book, as long as the preceding Declaration was short, is another call for equal rights. It is Negro Anthology Made by Nancy Cunard 1931-1933, published in 1934. It contains 855 pages, weighs almost 8 pounds, and includes 200 entries by 150 contributors, most Black. There are also nearly 400 illustrations. Among the contributors were Langston Hughes, Samuel Beckett, Jomo Kenyatta, W.E.B. DuBois, Ezra Pound, Theodore Dreiser, Zora Neale Hurston, Louis Armstrong, Norman Douglas, and William Carlos Williams. There were 1,000 copies printed, but it did not sell very well and many were destroyed in a warehouse during the bombing of London. Nancy Cunard was a remarkable woman. A wealthy white heiress of the Cunard steamship line, she devoted her life to helping those less fortunate. She paid for the publication of this book as no one else would invest in such a project. She then went on to fight the rising fascist movement, first aiding refugees from the Spanish Civil War and then aiding the French resistance in World War II. Cunard's dedication to her causes was such that she ended up giving her entire fortune away, and sadly, her problems compounded by mental illness, she died on the streets of Paris broke and half-starved. This copy has a rare inscription from Cunard, “Nancy Cunard, May 1942 - London.” Item 11. $24,000.

This is probably the most important American Atlas of the 18th century. The title is The American Atlas; or, A Geographical Description of the Whole Continent of America. It was the work of Thomas Jefferys though he never got to see it in this form. The 22 maps were offered separately during Jefferys' lifetime. He died in 1771 and in 1775, his successors, R. Sayer and J. Bennett, combined his maps in this atlas. There are maps of 11 of the 13 colonies, French Canada, North America and South America. Jefferys' maps were intended to give Britain a better understanding of their American empire so the timing of this atlas is ironic. It came out as their colonists were starting a revolution to free themselves from that empire. The result was that his maps were used by both sides in planning their war strategies. Item 28. $185,000.

Who collects old telephone books other than a paper recycler? Usually, they are only wads of worthless old paper, except when it is one of historical significance. Here is one of those exceptions. Item 36 is a Los Angeles phone book, but a rare one. It is titled Los Angeles Telephone Co. Los Angeles Exchange. It is from April 13, 1882. Obviously, it is a very early phone book. The telephone had only been invented six years earlier and on April 3 of 1882, the Los Angeles Telephone Co. was given the right to erect poles and lines within the city. I don't know how many people in Los Angeles have telephones today but in 1882 it was 90. Their names, businesses and locations are provided, while the book informs readers to “ring two bells to call central office.” And if you did, you got to speak to a real person, not a machine. Item 36. $12,500.

Whitmore Rare Books may be reached at 626-714-7720 or info@whitmorerarebooks.com. Their website is www.WhitmoreRareBooks.com.