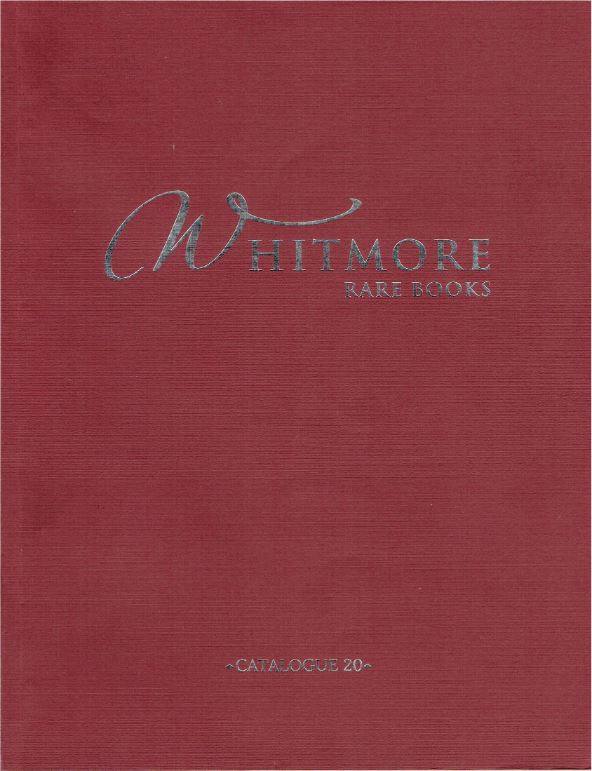 Whitmore Rare Books has published their Catalogue 20. Over the past ten years, Whitmore has grown from a small shop to one of the West Coast's major booksellers. While subjects in this catalogue vary, and there is much in both the categories of fiction and nonfiction, they now specialize in important books and material in top condition. You will recognize many of the books, most of the authors, or the significance of the subjects. Everything here is highly collectible. These are a few samples.

Many consider Mark Twain America's greatest writer, and you will get no argument from me on that one. However, he was not always so highly recognized. By 1869, he had already gained some notoriety for his Jumping Frog, but this book truly sealed his reputation as a humorist. The title is Innocents Abroad, or the New Pilgrims' Progress and it is sort of a travelogue of a trip he took with other “pilgrims” (aka tourists) to Europe and the Holy Land. Twain spares no one his wit, not fellow travelers, European society, nor even the Holy Land. Twain was a keen observer of those around him and knew how to find the humor in everyday events. Today, Twain's reputation is built primarily on his fictional adventure stories of Tom Sawyer and Huckleberry Finn, but during his lifetime, Innocents Abroad was his top selling book. This first edition in near fine condition comes with the two volume Salesman's Prospectus. Item 7. Priced at $9,500.

This next book recounts a significant though long forgotten event in the history of African slavery, forgotten, at least, until Steven Spielberg created a movie about it. The title is A History of the Amistad Captives: Being a Circumstantial Account of the Capture of the Spanish Schooner Amistad, by the Africans on Board... The Amistad was not a slaver, usually carrying goods between ports in Cuba or to Caribbean locations. At the time, it was transporting sugar-related products but also 53 slaves, recently kidnapped in Sierra Leone and taken to Cuba, between Cuban ports. Slaves were crammed below deck in barely three feet of space when one located a file and freed his shackles. Others were released and they overcame the crew, killing the captain and two others, but sparing two Spaniards who they ordered to guide them back to Africa. Instead, the Spaniards tricked them, sailing up the coast of North America until taken into custody by American officials off the tip of Long Island. They were taken to Connecticut and put on trial. The ship's owners and Spain demanded their “property” be returned, the U. S. taking their side on claimed treaty grounds. The British, who were enforcing a ban on the slave trade by 1839, took the Africans' side. The trial was held in 1840, which is when this account was published. The author was John W. Barber, a writer of children's stories and small town histories, who realized this was an important case. He thoroughly researched it and interviewed some of the Africans. Ultimately, the District Court ruled for the Africans, saying they were not Spanish property as they were not legally slaves. A claim that they were Cuban-born slaves, which would then have made their status as slaves legal, was determined to be false. The U. S. government did not go down quietly, appealing first to the Court of Appeals and then the U.S. Supreme Court, but this came the year following the 1840 publishing of Barber's book. The Africans won both appeals, their Supreme Court case argued by former President John Quincy Adams. With the aid of missionary societies, they were finally returned to their homeland. Item 72. $3,500.

Next we have one of the oddest, but also most beautiful math books you will ever find: The First Six Books of the Elements of Euclid in which Coloured Diagrams and Symbols are used instead of Letters for the Greater Ease of Learners. The author was Oliver Byrne, his edition of Euclid published in 1847. Byrne came up with the odd idea that it would be easier to learn geometry if, instead of using letters, one used different colored shapes to express the formulas for lines, angles, etc. He explained, “It is based on the theory that by means of colour the Elements of Euclid can be acquired in less than one third the time usually employed.” Having looked at his pages, I believe it would take three times as long using Byrne's colorful shapes instead of letters. However, it cannot be denied that this is a more appealing and artistic book than any other geometry or math text you have ever seen. According to typographic designer Ruari McLean, “each page is a unique riot of red, yellow, and blue, attaining a verve not seen again on book pages till the days of Dufy, Matisse, and Derain.” You might see some cubist art here except that the movement did not yet exist in 1847. Byrne wrote many books on mathematical, engineering, and military subjects, but none with the lasting impact of this one. Not much is known about him, though he was a mathematics professor and likely was, like his book, a bit eccentric. Item 56. $12,500.

When it comes to what to do with children, Jonathan Swift had a modest proposal, although this may not sound Utopian to most. Item 10 is A Modest Proposal for Preventing the Children of Poor People from Being a Burthen to their Parents, or the Country, and for Making them Beneficial to the Publick. Offered is a second edition, published in 1730. Actually, it is an outrageous proposal, but is written in such a clinical, deadpan way as to make the absurd sound reasonable. This is satire taken to the limit. Swift's modest proposal is to take the poor children of Ireland, whose parents cannot afford to raise them, and serve them as food to the rich. As he explains, “I have been assured by a very knowing American of my acquaintance in London, that a young healthy child well nursed is at a year old a most delicious, nourishing, and wholesome food, whether stewed, roasted, baked, or boiled; and I make no doubt that it will equally serve in a fricassee or a ragout.” Swift presents statistics and financial calculations to explain why this will serve both the poor and rich, continuing to speak in a reasoned and serious tone throughout the book. There are different thoughts about exactly the points Swift was making as some drew on social and economic theories of his time, but the main thrust is to ridicule the wealthy who denigrated the humanity of those who lived in poverty. $15,000.

Few people have quite the mixed legacy of Charles Lindbergh. From an unknown, he suddenly became an American hero when he was the first to cross the Atlantic alone in an airplane, the “Spirit of St. Louis.” A few years later, he would be the recipient of an outpouring of sympathy when his young son was kidnapped and murdered. However, in the years leading up to the war, he became an isolationist, a leader of the America First Committee, a man who made some racist statements and who, to many, particularly President Roosevelt, appeared to harbor Nazi sympathies. His attempts to keep America from supporting Britain and participating in the war changed after Pearl Harbor. Still, his reputation was severely tarnished and would never be the same again. After many years of writing, and a quarter century after his historic flight, he finally published his account of that transatlantic flight, a reminder of what once made him an American hero. That book is titled The Spirit of St. Louis, and was published in 1953. Item 55 is a presentation copy of the first trade edition, inscribed by Lindbergh to Henry J. Friendly, a judge on the Second Circuit of the U. S. Court of Appeals. $2,750.

Whitmore Rare Books may be reached at 626-714-7720 or info@whitmorerarebooks.com. Their website is www.WhitmoreRareBooks.com.