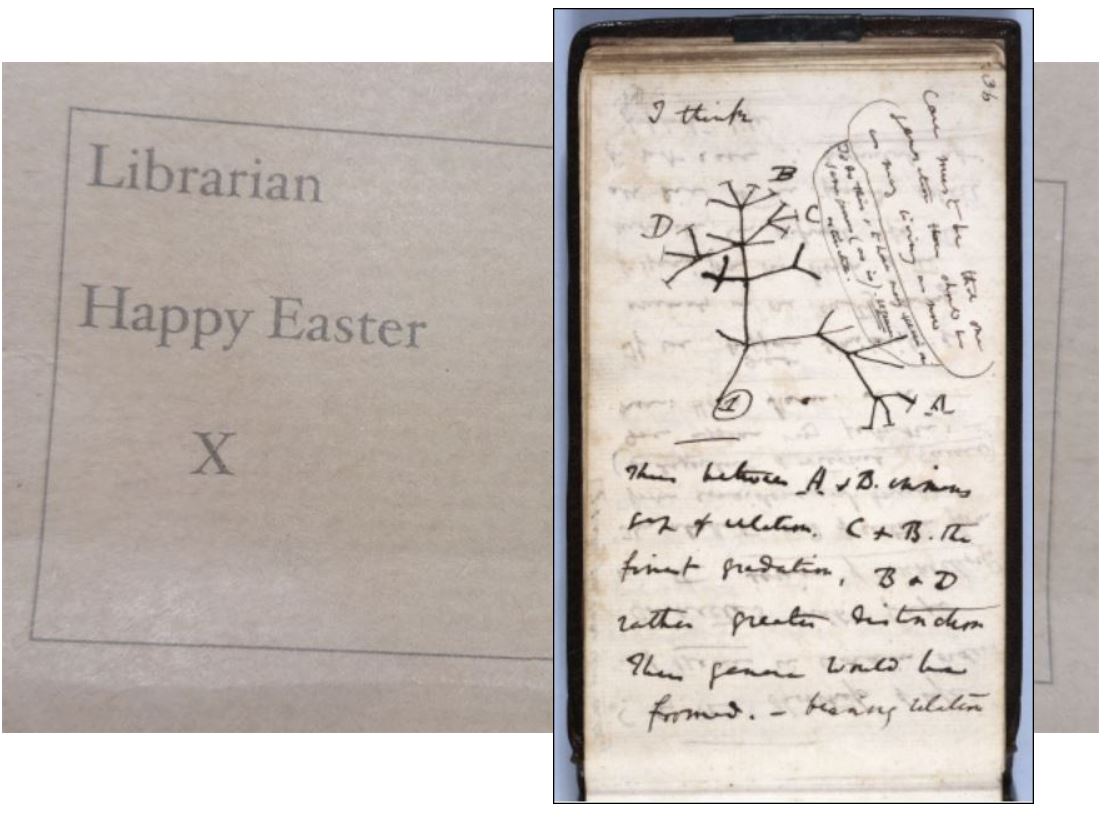 One of the most important documents in scientific history, missing for 20 years, has been found. More accurately, it has been returned. For 20 years, librarians at Cambridge University have been uncertain whether Charles Darwin's original notebooks were misplaced or stolen, but as the years dragged on, they became more convinced it must be the latter.

Now they have their answer, and it happened in an unexpected manner. They showed up on the floor outside the librarian's fourth floor office. The notebooks were inside a pink gift bag left on the floor. Inside the bag was the books' archive box, and inside that box was a plain brown envelope. On the envelope were the brief words:

Inside the envelope were the notebooks. The books were last accounted for in September 2000 when they were removed from their secure location in the Special Collections rooms for photography. The photography project was completed in November of that year, but evidently no one made sure they were returned to a secure location. By January of 2001, after a routine check, it was noticed that the archive box containing the notebooks was missing. A search did not find them. Nonetheless, librarians believed they had simply been misplaced. The Cambridge University Library possesses 10 million books, manuscripts, maps and other items on 130 miles of shelves. Finding a misplaced small box (the notebooks are the size of a postcard) is a needle-in-a-haystack proposition. Stuck behind a book on a shelf or something like that would be almost impossible to notice.

While the initial search was unsuccessful, the librarians never gave up. They still believed they were in the library somewhere so over the years, they conducted periodic new searches to find them. All were in vain. At the beginning of 2020, Dr. Jessica Gardner, University Librarian and Director of Library Services, announced that they would undertake one more, very thorough search. Specialist staff was assigned to various areas and testing for fingerprints was also employed. Still no luck. Finally, in January 2021, the Library concluded the most likely explanation was that the books were stolen. The Library called in the local police and placed notices with various entities to be on the lookout for them, including the Interpol database of stolen art works, the Art Loss Register, and the Antiquarian Booksellers Association. Dr. Gardner said at the time, “I am heartbroken that the location of these Darwin notebooks, including Darwin’s iconic ‘Tree of Life’ drawing, is currently unknown, but we’re determined to do everything possible to discover what happened and will leave no stone unturned during this process.”

That brings us to today's news. Who took the books, the mysterious “X,” remains unknown. Why is also an interesting question. These notebooks are almost certainly worth many millions of dollars, but with a value like that, and the fact that these are one-of-a-kind documents, it would be virtually impossible to sell them. To do so would lead to their quick identification and source, and with that the identity of the thief. The fact that they were returned in this manner makes it almost certain that the person who returned them was the thief or someone who knowingly obtained them from the thief. Innocent possessors do not return goods this way. The notebooks show no sign of damage, indicating they were well cared for during the past 20 years. The most likely explanation is that they were taken by someone who admires the works and desperately wanted them for him or herself. The nature of the circumstances indicates it certainly could have been an inside job though this is not certain. Officials have not given up searching for the guilty party even if the notebooks themselves have been returned, but the urgency is no longer quite as great as it was when the notebooks were missing and possibly at risk.

Anything in Darwin's hand is going to be valuable, but these are exceptional items even for the great naturalist. They were written by Darwin shortly after his return from his four-year voyage around South America on the Beagle as the ship's naturalist. He spent most of that time on land, surveying plant and animal specimens along with the geology, including fossils. These notebooks recount some of his findings. They also contain his famous “Tree of Life” sketch made in 1837. On it, earlier species are shown as the trunk while evolved descendants are seen as its branches. Darwin realized that sometimes the trunks consisted of extinct ancestors, found only in the fossil record.

Consequently, these books are known as the Tree of Life Notebooks or Transmutation Notebooks. By this time, Darwin recognized that species were transmuting or evolving into different species. What he had not concluded yet was how. Darwin's grandfather, Erasmus Darwin, had reached the same conclusion before Charles was born, saying that all life had evolved from some sort of primordial organism. What Erasmus never figured out, and Charles had not yet, is how and why they evolved. That is what the latter would figure out over the next few years. It was not some mysterious force within the organism that made it strive towards improvement and pass those advances down to their children, but simply the process of natural selection, the more fit individuals surviving and being the ones who lived to reproduce.

This time, Dr. Gardner was able to issue a much happier statement than in January 2020: “My sense of relief at the notebooks’ safe return is profound and almost impossible to adequately express. Along with so many others all across the world, I was heartbroken to learn of their loss and my joy at their return is immense.”