MacKenzie: the More Mediocre, the Healthier! 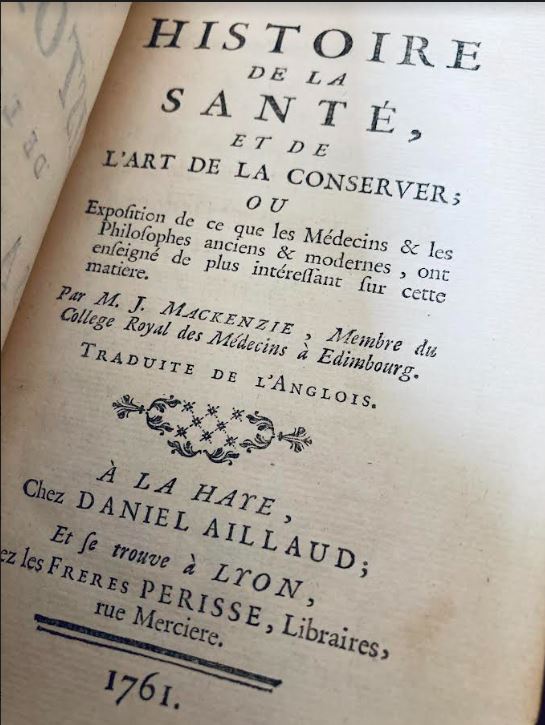 I had a headache the other day so I took a tablet and was fine again. Ordinary miracle in a world now able to modify a rat’s cells so it can live 30% longer! But mankind’s come a long way! This I realized while leafing through James MacKenzie’s History of Health, and the Art of Preserving It (Edinburgh, 1758).

Passions and their Cure

James MacKenzie was a “Fellow of the Royal College of Physicians in Edinburgh”. His book is a fascinating snapshot of the state of medicine in the 18th century. Hippocrates’ theory regarding the six things necessary to life had been established 2,000 years previously—and it was still current. “They were given the weird name of non-natural things,” MacKenzie writes. “Namely: aliment, air, exercise and rest, sleep and wakefulness, repletion and evacuation, together with the passions and affections of the mind.” The theory of passions and affections is a fascinating one. “Anger and joy will increase perspiration (just like stretching and yawning after sleep—note of the writer); fear and pain will reduce it,” MacKenzie states. “Hence, timorous and melancholic persons are subject to obstructions in the bowels, to hard tumours in several parts of the body, to hypochondriac disorders, and to profuse cold sweats.” Unfortunately, there’s no remedy to the diseases caused by passions but “contrary passions”—providing that they are not violent. A soft joy, for instance, “discharges only what is superfluous by perspiration; but immoderate, and sometimes sudden joy, discharges also what is useful; and if it continues long, prevents sleep and dissipates the strength.” Mediocre or moderate, was the key to health in a science that didn’t dissociate feelings from emotions and physical phenomena. And guess what’s the best way to put the afflictions of the soul (responsible for so many disorders because of their negative impact on blood) under the control of reason? “A faithful and virtuous friend.” One in need is one indeed.

Man is also described as the slave to his humours—many might argue that it’s still the case today. According to Hippocrates, there are four of them, “viz. blood, phlegm, yellow bile and black bile (...). Health consists in a due mixture of these four.” Distempers, the father of medicine adds, are produced by a redundancy in any of them. But there are remedies—including some acceptable ones! For instance, “moderate commerce with the sex* is of service to such as are loaded with the phlegm”—now, that’s good news! “But commonly it binds the belly”—damned! MacKenzie, just like the great Galen (129-201) before him, advocates exercise—with moderation (another word for mediocrity). “The Golf also should be practised,” he says. The French translator, concerned with the ignorance of his readers, added a footnote regarding the “commerce with the balls”: “On a flat surface, one pushes two hard balls with appropriate sticks towards remote holes dug in the ground; (...) The less you hit the ball to make it fall into the hole, the better. If you hit it less than your adversary, you win.” But don’t be overwhelmed by joy and always remember in your triumph: “a moderate victory conduces more to health than a glorious one.”

Vegans will rejoice that their principles were already discussed. MacKenzie reminds us that in the times of Moses, man was eating vegetables only, until God positively gave Noah the permission to eat “animal food” after the flood. In the 3rd century, a remote disciple of Pythagoras named Porphyrus stated: “It was not from those who lived on vegetables, that robbers or murderers, sycophants or tyrants, have proceeded, but from flesh eaters.” MacKenzie dismisses Porphyrus’ argument, calling him an “enthusiast”; Galen, he adds, had clearly established that a mixture of animal food with the vegetable kind is more proper for the healthy, and more easily digested. “The ridiculous notion of the transmission of souls, and some other unaccountable fancies, has induced several sects of philosophers, and their admirers, to abstain from animal food, as far back as Pythagoras, and down to this day.” Well, if you consider that the mutton cooking in your oven could have been the reincarnation of a late relative of yours, you may lose your appetite indeed. Furthermore, the early “vegans” claimed that the digestion of meat creates bad humours that make people aggressive. MacKenzie cuts in: “Nor is the wild bull that eats grass, less furious than a lion that feeds on flesh. And we daily see some birds, that live on grain, fight and tear each other with amazing animosity.” An advocate of moderation, MacKenzie settles the quarrel with a wise piece of advice: “Since custom has made it almost natural to us now to eat flesh, we may eat it indeed, but moderately, and not gorge ourselves with it like lions and wolves.” Dear vegan readers, I hope this makes it easier for you to digest.

This book shows, among other things, that out of our many mistakes were our certainties born—and that the most mediocre among us have probably outlived the others (and that would explain a lot of things). But if you’ll excuse me, I now need to have a moderate commerce with the sex; then I’ll play golf with a virtuous friend of mine; then we’ll cook some vegetables and some meat that we shall eat like cats. If this mediocre life of mine doesn’t last longer, at least it will sure SEEM to.