The Big Guns will be in the rooms: At Bonhams 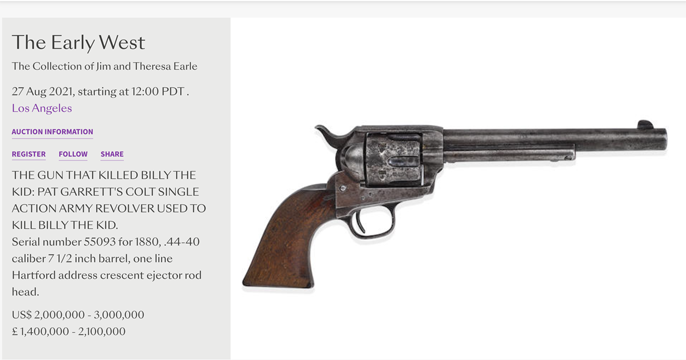 The gun used to shoot Billy The Kid

Books, manuscript, maps, and ephemera take you only so far.  It’s possible to disappear into a great story but it’s close to shocking to consider you can personally acquire objects mentioned, pictured and/or referenced in stories you learned by heart when you were a kid. I’m writing about this as Bonhams is soon to sell The Earle Collection of the Early West which is deep with history-laden objects.  It’s well worth a look.

Some collections are unintentional but the Earle Collection was not.  Mr. Earle’s collection was from the get-go heavy on guns with historical association.  A few years ago he described one example, the gun that killed Billy the Kid  as “This is not just a gun – it is the history of America.”  Such objects have been commanding auction house attention for decades and no doubt many will reappear in the years ahead.  Violence fascinates.

Depending whether your interest is about the good or bad guys you have many choices in this sale.  Mr. Earle collected both.  Lots 1- to 49 are weapons.  The bad guys’ weapons are often more valuable although Pat Garrett’s colt single action army revolver he used to kill Billy is estimated at $2,000,000-3,000,000 while a rifle that Mr. Bonney stole from the Lincoln County Courthouse to escape in 1876 is estimated $300,000-500,000.

While the collection includes objects relating both to famous desperados and lawmen, there are many opportunities to bid on weapons that will not require taking out second mortgages.   Twenty-two of the 49 weapons have low estimates beginning under $10,000.

And there is more - two other related sections:  Fine Art, Decorative Art and Western Collectibles, and Manuscripts and Memorabilia.  Such material has long been in Rare Book Hub’s Transactions+; 1,328 lots mention Billy the Kid while Pat Garret appears in 373.  In Bonhams’ new catalogue there are going to be many lots including letters, manuscripts, ephemera that are new to us.

The second section of the sale [lots 50-94] focuses on fine art, decorative art and western collectibles, comprising 45 lots including paintings, sculptures, objects including drums, strong boxes, a panoply of objects, as well as saddles and chaps.

Ephemera is included in the third section, Manuscripts and Memorabilia, lots 95 to 265.  Here are some examples:

As well, there is a tip of the hat to 20th century criminals.

As a writer about books, manuscript, maps and ephemera, I’m taking a deep breath and state the obvious:  crime pays.

Here's a link to the complete sale.