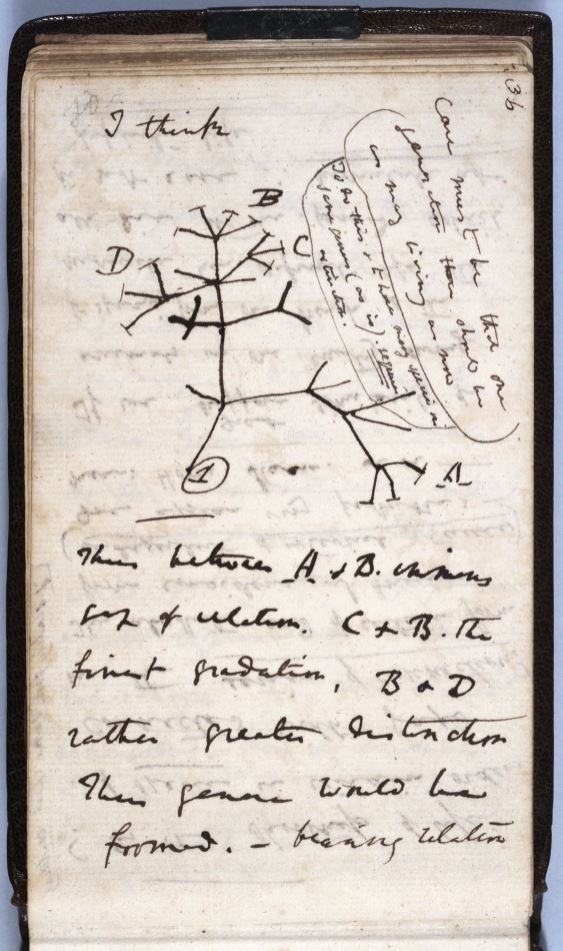 Two decades after they disappeared, the Cambridge University Library has concluded that two missing Charles Darwin notebooks have been stolen. That seems like a long time, but for the past 20 years the library has believed the notebooks were misplaced. If that sounds improbable, the Cambridge Special Collections rooms have millions of documents in countless boxes, occupying 28 miles of shelving. The entire library contains 130 miles of shelves. It's not that hard to imagine why librarians thought they were misfiled despite an inability to find them.

The missing notebooks were created by Darwin not long after his return home from his voyage on the ship the Beagle. That ship had spent much time surveying around the southern part of South America. Darwin was the ship's naturalist. He noted similarities yet differences between species in different areas and wondered how this happened. It would be the starting point for the development of his revolutionary theory of evolution.

Back home in 1837, Darwin wrote some of his thoughts in these notebooks. They are now known as the Transmutation Notebooks as Darwin began to theorize how one species could transmute to another. One of these notebooks contains his famous Tree of Life sketch, where he connects variant species to common ancestors. Darwin believed that as new species developed, older ones would be doomed to extinction, explaining why there are fossils of extinct plants and animals that are similar to living ones. In the months following, Darwin developed his theory of how some variants in species would be better adapted to their environment and would outcompete their ancestors, thus leading to the latter's extinction. Survival of the fittest.

By the early 1840s, Darwin had mostly figured out how species evolved, but he sat on it for years because he understood how controversial it would be. Most people believed new species were separate creations of God, and many would consider Darwin's theory to be sacrilege. It was only when Alfred Russel Wallace independently reached a similar conclusion about evolution that Darwin revealed his theory, the two publishing a joint paper in 1858.

The last known whereabouts of Darwin's notebooks goes all the way back to the summer of 2000. They were removed from the Special Collections strong room for photography. During a routine check in January 2001, it was discovered that the small box (size of a paperback book) containing the notebooks was missing from its proper location. That led to a search, and many others over the past 20 years, none of which was able to locate the notebooks. Librarians believed they were misshelved in the vast storerooms of the library, containing around 10 million items. They were never found.

At the beginning of 2020, Director of Library Services Dr. Jessica Gardner organized a new search. Various specialist staff were assigned to search different areas of the library, while a thorough search was conducted of the large Darwin collection. Again, nothing was found. In consultation with experts in the field of theft of cultural artifacts, the library has concluded that the most likely explanation is theft. Dr. Gardner noted that security 20 years ago was not the same as it is today. Something of this importance missing would be recognized immediately, and there is surveillance and other security measures in place today that did not exist back then.

This does not mean that the library has given up all hope that the notebooks are still somewhere in the library. Searches will continue, and it is estimated that a complete search will take another five years. Nonetheless, they will move forward under the belief that theft is the most likely explanation. Local law enforcement and Interpol have been notified. The missing notebooks have been entered in databases of missing items and the ABA (Antiquarian Booksellers Association) has been called on to keep their eyes open for someone attempting to sell them. The library is also calling on all private individuals who may know something about the notebooks, about how they disappeared 20 years ago or where they are today, to contact the Cambridge University Library or law enforcement.

If the Darwin notebooks were stolen, the question is who and why. Their value would be immense. The library said, “Given their unique nature, the value of the notebooks is difficult to estimate, but would probably run into millions of pounds.” We would only add to that “many” millions of pounds. However, their uniqueness and enormous importance makes them essentially unsaleable. Whoever might possess the notebooks would have to always be quiet about them, tell no one, never share with anyone that they have these notebooks. There will also be the fear that at some point someone will discover they have them and the penalty will be great. What is the point of stealing the notebooks for this?