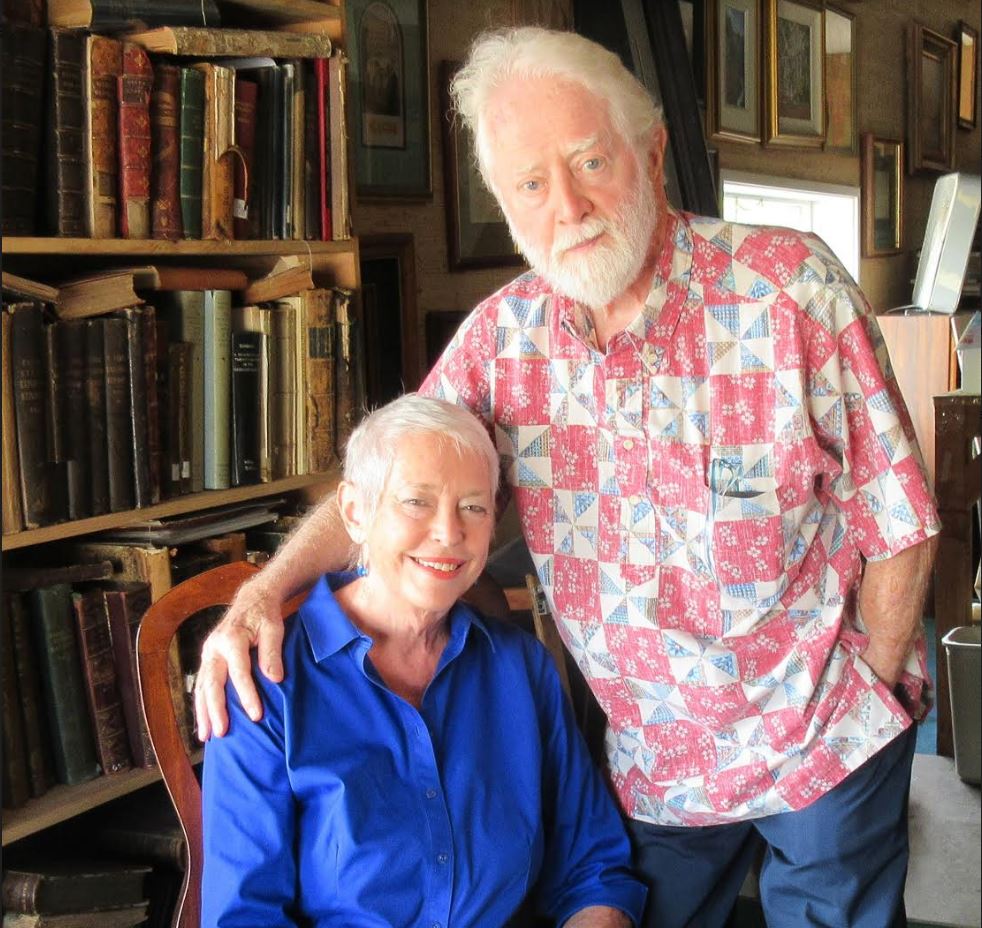 Alan and Charlene “Char” Walker have just completed their 40th year as owners of Lahaina Printsellers, Ltd., where they’ve been antiquarian dealers of maps and prints, pioneers in high quality digital reproductions, patrons and publishers of artists, operator of galleries, and framing specialists. They’ve worked as a team and through the years their business model has evolved and modified as the market changed and new technologies emerged.

The couple met in the Bahamas where he was working and she was on holiday: He was a Scottish lad kicked out of school at 15; while she was a shy young woman from Northern Michigan who found he could make her laugh. A short time later they made the transition to Maui, married in the 60s, and never looked back.

Now, decades later, they are both in their 70s and married for 53 years. The attractive accomplished pair are still running a visual arts enterprise that involves galleries, digital printing, framing, marketing, a substantial technical & sales staff, not to mention a break even point that that hovers around $5,000 a day. Life is not cheap in sunny Lahaina, Hawaii where rents are frequently compared to those in Times Square.

It didn’t start out quite that complicated. The couple recalled their early years on Maui working in the visitor industry, construction, tending bar, and other similar jobs. One of their employers introduced them to scrimshaw and they eventually bought the business. But then things got dicey when restrictions were imposed on the ivory business and they looked for a new venture.

On a trip to England and Scotland in 1974, they spent time scouring map and print dealers for images relating to Hawaii (in Capt. Cook’s day known as the “Sandwich Islands”) and found a wealth of material at very low prices. At that time there was little interest in these pictures, but back in Lahaina the early maps and views documenting the exploits and travels of Pacific explorers found a ready market and a clientele willing to pay heady prices for original prints and maps.

At their zenith in the early 90s, Lahaina Printsellers, Ltd. employed as many as 30 full time workers. It was headquartered in a large beautifully appointed gallery modeled after an English gentleman’s club. They had other galleries and poster shops in high end resort locations and ran a full scale framing workshop that crafted one-of-a-kind custom frames for original works; all that and worldwide shipping too.

The couple agree they were fortunate in the early years to work with Mike Cordi, a young man with technical skills who persuaded them to buy their first bubble jet printer. He helped them make the transition to a computerized world soon to be dominated by the internet. Like many others in the antiquarian field as the internet spread and became more powerful, their customers for original antiquarian materials were not as numerous, especially when goods were available on other venues for lower prices.

In the old days Lahaina printsellers did occasionally make reproductions using copper plate engravings in the traditional manner. Once printed they’d test the stability of the images by putting them up on the roof in the hot Lahaina sun.

In the new scheme of things, as Char explained, “We realized there was a market for high quality reproductions but there weren’t any to be found.” That’s how they became pioneers in the fast transforming world of digital reproduction using a variety of software to scan and enhance imagery and expensive large format digital printers to reproduce what became an enormous library of images that could be output in many sizes, formats and on many surfaces.

Eventually they focused on a specialty canvas based strata with a unique coating that helped to stabilize color and eliminated the need for glass in the framing process. Now, in addition to visiting their galleries, they could be found online. Their customers were fascinated by things such as state maps, California as an island, Texas as a republic, or the route of Lewis and Clark blown up to cover an entire wall. They liked not only having thousands of images to choose from, but also being able to order them in a variety of sizes. Their basic formula for cost relates to the number of square inches of any given piece.

As time went by, though the Walkers still bought and sold originals, commissioned art and represented artists, their bricks and mortar galleries shrunk to two locations: one in a high traffic area and the other more off the beaten path. They spun off their custom framing and now only use pre-made standard sizes frames manufactured to their specifications in the Philippines.

Currently their business has transitioned from mostly originals to mostly made-to-order reproductions. Though much of their emphasis is still on Hawaiiana, including antiquarian materials and nostalgia from the early days of tourism, their inventory of digital scans also includes a wide variety of Western Americana, photography, artists, golf art and other similar genres. Alan named “Cook’s General Chart of 1784 - showing the track of all three voyages and the new discoveries in the Pacific,” as perhaps their best selling image.

Some things didn’t work as well. “There were a lot of blind alleys” he said, referring specifically to a venture involving golf imagery that cost a fortune and did not perform as well as they had hoped.

He was not eager to share the details of the digital side of their business, only to say that it’s “expensive, fast changing, and leasing is the way to go.”

“We learned as we stumbled along,” he said, “and advanced as the technology improved.” Equipment costs are high and talented technical oriented employees not easy to find. He said they are fortunate to have Dave Shively (who joined the company in 1996 as a technical graphics specialist) as a “person who has been critical to our success.”

Likewise, though their sales force is not as large as it once was when there were multiple galleries, several of their gallery staff have been with them for decades.

To this day Alan Walker loves to buy and has good stories to tell about wonderful finds and the deals they turned into. Char, on other hand, is noted for her sales ability, and fine instinctive eye when it come to framing. She attributes much of their success to Alan, saying, “His creativity is exceptional, everything is due to him.”

Like many small business people who are getting older the Walkers are thinking of retirement and without children they do not have a second generation to take over the family business. Alan said their inventory and back stock is worth “more than a million dollars at 10% of actual retail value.” Their inventory includes antique prints and maps, quality reproductions, frames and supplies. The pair hopes to find some younger financially able entrepreneurs who would find the Hawaii lifestyle appealing and would not be daunted by the high cost of living or cut throat competition in the visitor market.

Walker does not see the company that he and his wife have built as part of the “trade,” more a business that evolved as time went by and in response to market forces. “We’re just trying to make a living,” he said. “So you see starting with nothing we’ve made a go of it.”