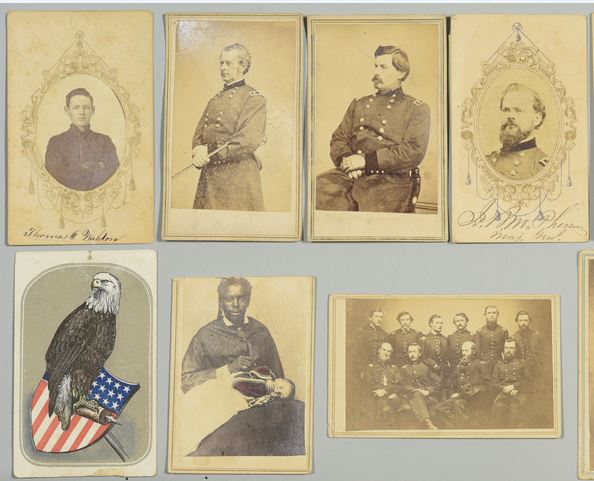 Over 500 albumen prints and CDVs that descended in the family of Nashville photographers Otto and C.C. Giers are offered.

There will be an amazing collection of Americana sold by Case Antiques Auction & Appraisals of Knoxville on July 30. Books, autographs, early photographs, maps, and other paper, including a slave archive will be featured. Much of the material is from the antebellum period, with collections of two Tennessee plantations, Devon Farm of Nashville and Hamilton Place of Maury County, featured. Other items come from different Tennessee estates and collections.

Among the archive lots are more than 60 slave bills of sale and receipts related to David Morris Harding of Oak Hill Plantation in Nashville (later renamed Devon Farm). They are accompanied by two of Harding's notebooks recording slave transactions, some in Baltimore, others around the South. Also coming from that estate are over 500 early albumin prints and cartes de visite covering people from slaves to generals. Most came from the archives of the business of Nashville Civil War era photographer C.C. Giers and his son, Otto Giers, who married into the Devon Farm family. Other images chronicle the growth of Nashville in the post-war and post-Reconstruction era.

Two dozen autograph lots also come from the Devon estate, mostly related to land grants from the family of patriarch John Davis. Davis was an original surveyor of Nashville, back from when it was still part of North Carolina. Signatures include the very scarce signature of James Robertson, founder of Nashville, along with those of North Carolina Governors Alexander Martin, Richard Dobbs Spaight, and Samuel Ashe, and Tennessee Governors Sam Houston (3), James K. Polk (2), Andrew Johnson, Willie Blount, William Carroll and Joseph McMinn. Three of those governors would go on to be presidents, Polk and Johnson Presidents of the United States, Houston President of the Republic of Texas.

Speaking of presidential signatures, two from Abraham Lincoln are offered. One is a presidential signed pardon for Wilburn Bybee of Kentucky in 1864. The paperwork indicates he had been imprisoned for "robbing the mail," but it is of the same format used for freeing Confederate prisoners – Bybee agrees to defend the Constitution and obey all laws relating to slaves (notably the Emancipation Proclamation). The pardon is adhered to a copy of volume 1 of Abraham Lincoln: A History, published in 1890 by Lincoln’s former secretaries, John G. Nicolay and John Hay, whose autographs are also included. The second Lincoln signed document, also signed by Secretary of War Edwin Stanton, confers the rank of captain in the Veterans Reserve Corps to James Remington of Rhode Island. Remington was seriously injured after only a short period of military service and had to be discharged, but wished to continue serving in some capacity despite his disability.

Other items offered include a Gold Rush diary, Civil War diary, a rare Civil War broadside, an autograph album containing signatures of members of the Tennessee legislature in 1875-76, and an archive related to the Nashville, Chattanooga and St. Louis Railway. There are family archives from the John Davis-Edward Hicks-Otto Giers families of Nashville and the Lucius Polk-Henry Clay Yeatman families of Maury County. Books from those same historic families’ libraries include Thomas Jefferson’s Notes on the State of Virginia (well preserved, but lacking map); an 1837 first edition of Dana’s System of Mineralogy, the complete first 15-volume run of Appleton’s Journals; Richardson’s Dictionary 1839; a first American edition of Davy’s Devon Herd, numerous scarce 19th century books on botany, fishing, and hunting; The Troopers Manual or Tactics for Light Dragoons and Mounted Riflemen by Col. J. Lucius Davis, published Richmond, 1861, and a group of 19th century books with rare Tennessee and Virginia binder’s tickets. There are archives from Civil War soldiers from Tennessee and Virginia, and one for English Crimean War General J. Scott Robertson.

There are many southern maps being offered in the auction as well. Included are a Pierre Mortier / Nicolas Sanson map of South Carolina, published in Amsterdam in 1696 (the first map of South Carolina printed in Europe), a Johann Baptist Hamann map of Virginia, Maryland and Carolina circa 1714, and maps of Texas, Tennessee, and Kentucky, along with a prospect view of Charleston, South Carolina, engraved by William Henry Toms and published 1779.

You will also find some more recent items in the sale. There is a crew patch and flag with astronaut autographs from the first Space Ship Columbia, and a 1965 Supreme Court photograph signed by all nine justices.

Along with the works on paper, there is much else from these estates to be found, such as art work, figurines and other collectibles, furniture, weapons, coins, rugs, jewelry, silverware, and more. Books and paper are featured at items 221-289, 710-764, 872-874, and 896, but the other items are fascinating as well.

The auction will be held in Knoxville on Saturday July 30, beginning at 9:00 a.m. Eastern time. You don't have to be present as absentee and phone bids will be accepted, along with the more common internet bidding via LiveAuctioneers. Case Antiques Auction & Appraisals may be reached at their Knoxville office at 865-558-3033, their Nashville office at 615-812-6096, or info@caseantiques.com. Their website is found at www.caseantiques.com.

If you go to their website, you will find both photographs and descriptions on the Case site and a link to the LiveAuctioneers page for bidding in the sale – www.caseantiques.com.