A Foundation and a Museum Battle Over Maurice Sendak's Estate 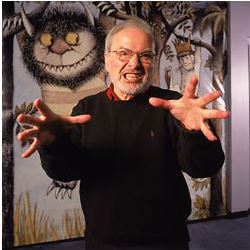 One suspects Maurice Sendak might have wanted to strangle the parties to this dispute (Virginia Tech Hillel photo).

The dispute over the estate of children's book author and illustrator Maurice Sendak has turned from ugly to downright personal, according to an article recently published by the Philadelphia Inquirer. The dispute is between the Rosenbach Museum of Philadelphia, where Sendak housed his original manuscripts and art for many years, and the executors of his will/directors of the Maurice Sendak Foundation (those executors and directors are one and the same). The dispute concerns millions of dollars in rare books in the possession of the foundation but demanded by the Rosenbach.

The bequests of Sendak, who died in 2012, were likely a disappointment to the Rosenbach. They had long housed and displayed his creative material, but rather than giving it to the museum in Philadelphia where it was kept, he set up a foundation in his hometown of Ridgefield, Connecticut, to hold his material. This was not meant to show disrespect for the Rosenbach, of which he was a great supporter and board member. Evidently, Sendak wanted to keep all of his material together where scholars could access it and believed a facility dedicated to his legacy was a better way of accomplishing this than keeping it at a broad-based library/museum. Along with his manuscripts and artwork, Sendak left the foundation his house, to be used to maintain his material.

What Sendak undoubtedly did not imagine, and surely would have been horrified to see, is the angry dispute between the foundation he created, managed by hometown friends he appointed, and the library/museum he loved and supported through most of his adult life. Sadly, such things can happen when millions of dollars are at stake. And while the intentions of his will certainly must have seemed clear to Sendak, when lawyers start splitting hairs, what appears clear as day can become the subject of doubt.

While leaving almost all of his items relating to his own career to the foundation, Sendak did not leave the Rosenbach empty handed. He left the Rosenbach his rare books and manuscripts relating to persons other than himself, a collection evidently worth millions of dollars. The will states that he bequeaths to the Rosenbach, "All of my rare edition books, including, without limitation, books written by Herman Melville and Henry James." Other paragraphs leave the Rosenbach "My collection of letters and manuscripts written by persons other than me..." and articles selected from his "Mickey Mouse collection." Another portion of the will provides that "It is my wish that the Maurice Sendak Foundation Inc. make arrangements with the Rosenbach Museum and Library for the display of [his personally created writings and artwork] upon such terms and at such times as shall be determined by the Maurice Sendak Foundation Inc. in consultation with the Rosenbach Museum and Library." Obviously, Sendak did not imagine there would end up being such a heated dispute between these two parties whom he anticipated would work together to display his work in Philadelphia, where public access would likely be much greater than a country road setting in rural Ridgefield, Connecticut.

After Sendak died, the foundation demanded the 10,000 items of personal work housed at the Rosenbach, which were returned. However, the Rosenbach, in its suit, claims that the foundation has not turned over "all of my rare edition books" which Sendak held in his personal collection in Ridgefield. Here is where things get ugly. According to the Inquirer, the Rosenbach suit claims that the executors have not turned over the rare books "motivated solely by the purpose of selling those very valuable books, including by breaking up the books into separate pages before sale to increase the gross sale price." The library/museum contends the foundation has maintained that some of the rare books aren't rare books at all to defend their refusal to turn them over. It says the foundation claimed that Beatrix Potter books are "children's books," rather than rare books. The Rosenbach says that the foundation claims that William Blake's Songs of Experience and Songs of Innocence aren't books because one is lacking a binding, the other has pages not identical to another copy. They cite comments by Blake himself that they were books. Also in dispute is a large collection of pop-up books by the very clever 19th century German illustrator Lothar Meggendorfer.

Then, the Rosenbach's claim gets more personal. They say, "They have done so in order to sell these valuable books at auction to raise money to pursue other purposes they prefer over adherence to Mr. Sendak's directives, including to pay themselves executors' fees, legal fees, and fees for serving as directors of Mr. Sendak's foundation." They support this with what is described as an internal email from a Christie's account executive who says she spoke to the executors. "They have made it clear that they would like to include as much property as possible in our sale, and limit the gifts to the Rosenbach," it says (the sale was not held).

The complaint cites other issues, not really pertinent to the Rosenbach, but as signs of improper behavior by the executors whom they seek to remove. They claim that the foundation has not made its collection available to the public, as provided in the will. The will states, "It is my wish that the Maurice Sendak Foundation Inc. operate said property as a museum or similar facility, to be used by scholars, students, artists, illustrators and writers, and to be opened to the general public in such manners as the directors of the Maurice Sendak Foundation Inc. shall determine." In an earlier comment to the New York Times, executor and foundation board member Lynn Caponera is quoted as saying, "His intention was someone would call up or make an appointment with me and then two or three people at a time would come up and I’d show them his studio and then his archives and that would be that." While some may question whether that constitutes "a museum or similar facility...opened to the general public," it should be noted that the directors of the foundation are given discretion to determine how the facility is to be open to the public, and Caponera must have been a very close personal friend of Sendak. He left her numerous large parcels of real estate and $2 million in cash.

It is beyond our capacity to judge the rights and wrongs of this case. If the Rosenbach position gets more play it's only because they have stated theirs more clearly. One would think that the two sides could get together, the executors would give the Rosenbach their rare books, they would plan the next exhibition in Philadelphia, and everyone could go home. This is what Maurice Sendak wanted and expected. His wishes seem to have been lost in the battle over money.

There is a moral here. Write your wills with detailed specificity. List everything of importance, rather than using broad categories. Heirs, that seem like loving family, can fight to the death over money. Sendak clearly loved the idea of his foundation and the people he selected to run it, and he loved the Rosenbach. Now they fight over his bequest. Somewhere, the Wild Thing is crying.