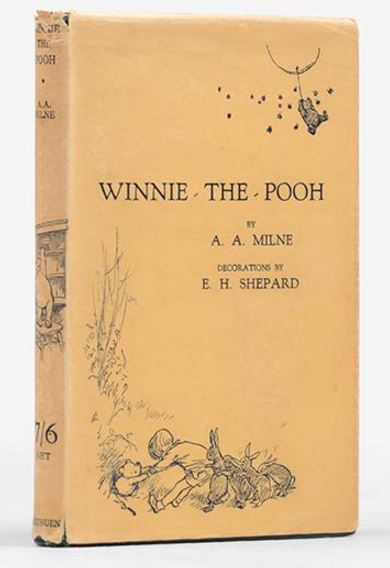 "Winnie-the-Pooh," (a bear of very little brain) turns 90 this year. The fictional English bear and other characters created by A.A. Milne first appeared in print in 1926 in a small volume that was an immediate hit. It followed Milne’s earlier 1924 volume of verse for children “When We Were Very Young," which had also been wildly popular.

Pooh, also aimed at youngsters, told the story of the boy Christopher Robin and his friends Pooh, Piglet, Tigger, Eyore and others. It focused on their adventures and activities rambling through the the Hundred Acre Wood, a thinly fictionalized version of the much larger and very real Ashdown Forest in East Sussex, England--  where the "Winnie-the-Pooh" stories were set. This second volume was also embraced by the reading public with even greater enthusiasm.

“Winnie-the-Pooh” was followed in 1927 by another volume of poems for children “Now that We are Six”; and the quartet of poems and stories for young people finished up in 1928 with a second book of Pooh’s adventures titled “The House at Pooh Corner.” All four were written by Milne, illustrated by E.H. Shepard and published by the London house of Methuen.

Each  of the volumes was priced at 7/6 each (equivalent approx US $1.87 in 1920s or about $16 in today’s money). The prescient buyer who tucked them away and kept them in pristine condition, could easily be looking at a substantial sum for any or all of them given their popularity and present day demand for first and early editions.

As for Pooh - in the years between 1926 and 2016 the fame of the bear has only grown. His story has been translated into dozens of languages and his popularity is - if anything - greater than before. Not only did “Winnie-the-Pooh” stay in print continuously, many variants also appeared. For example, in 1958 a Latin translation became the first non-English book to be featured on the New York Times Bestseller List and it remains the only Latin book to ever be seen on the list.

In the mid-60s Winnie and friends entered the Disney stable of characters and was then (and is today) one of the most widely licensed and most lucrative of all their cartoon characters. The Disney franchise took liberties with the story and even added a character (Gopher) to the original line up. In 2001 Disney, which had been paying royalties on Pooh and friends, bought the rights outright through 2026 (expiration of copyright) for a cool $350 million. www.nytimes.com/2001/03/05/business/mediatalk-disney-buys-the-rights-to-winnie-the-pooh.html

It was not just Disney who took liberties with the famous honey seeker. According to a 2012 article (Pooh) “has been used by Benjamin Hoff to explain the tenets of Taoism, by Frederick Crews to satirize philosophical approaches used by academics and by John T. Williams to illustrate the works of popular philosophers including Descartes, Plato and Nietzsche. …. As if that weren’t enough, Kenny Loggins even wrote a hit song "Return to Pooh Corner."

So as we go into the celebratory mode, what’s new with Pooh?

For starters, in January of this year “Finding Winnie, ” a picture book that tells the true story of the real bear that inspired “Winnie-the-Pooh”, became the winner of the 2016 Caldecott award for children’s books, one of the most prestigious honors in the field of literature for young people. The story is based on the real Canadian bear named Winnie who ended up living in the London Zoo. www.usatoday.com/story/life/books/2016/01/11/caldecott-newbery-winnie-the-pooh-finding-winnie/78633224

Along similar lines  CBS ran a television feature on the real ursine backstory that inspired the fictional character. Here's a link to their coverage. www.cbsnews.com/videos/the-story-behind-winnie-the-pooh

But life for Pooh has not all been bedtime stories, gold medals and TV news. Recently the character took on a political edge when he was banned in China.

In 2013 President Obama and PRC President Xi Jinping met in California for diplomatic talks. At that time, a photo of the two men walking side by side inspired comparisons to Pooh and Tigger. The Chinese president was portrayed as the short pudgy bear while the tall lean American leader was cast as the ever bouncy Tigger. When the image hit the social media in China it instantly went viral and was just as instantly censored. A second installment a year or two later showing the Disney’s Pooh driving a  small auto was also construed as critical of the Chinese leader and became   the most censored image in China for 2015. globalriskinsights.com/2016/03/china-blacklists-winnie-pooh

Also on the horizon is a forthcoming motion picture about the life of Milne’s son - the real life Christopher Robin - and his relationship with his father. The trade papers have announced that Irish actor Domhnall Gleeson will star as A.A. Milne. www.scannain.com/irish/casting-irish/goodbye-christopher-robin

Even a brief look at the lives of Milne and his son reveal that the fame and wealth the character created for the family had a serious downside. After the appearance of his four books for children, A.A. Milne, a prolific writer and contributor to Punch, found it difficult to have his humor, fiction and plays aimed at adults taken seriously. His musings on his life appeared in 1939 simply titled “Autobiography.” (US edition)

His son, Christopher Robin, who in his youth was considered one of the most famous children of his day, in later life became a bookseller. He found that the legacy of Pooh and the verses such as “Christopher Robin is Saying His Prayers” had a serious down side. He was mercilessly teased at school and wrote about his increasingly tense relationship with his family, especially his father in his own autobiography “The Enchanted Places” (Methuen, 1974) and other volumes that fleshed out the details of his adult life.

No matter what happened to the author and his family, the characters and books he created have had many lives. In the world of books they live on in countless incarnations rare and not-so-rare. As an individual volume the first Pooh book with a dust jacket seems to be  the one most eagerly sought, but looking over prices in the past decade nice copies of all four volumes with and without dust jackets have consistently realized attractive prices.

There are quite a few copies of the 1926 first edition of Winnie the Pooh presently on the market. If price is no barrier one of the nicer items offered comes from London bookseller Peter Harrington asking £8,750 (pounds) for a first edition signed by the author and illustrator on the title page.

Willing to up the ante? Harrington also lists a copy of the signed extra limited edition, number 14 of 20 copies on Japanese vellum signed by both author and illustrator for £35,000. Harrington’s web page states that the first edition of “Winnie-the-Pooh” was first published in the UK in three issues: an extra limited issue of 20 vellum copies, a limited issue of 350. His stock of these and other books by AA Milne can be found at www.peterharrington.co.uk/authors/a-a-milne.

All manner of kitsch and Disneyana in every conceivable incarnation reside at the other end of the price spectrum. There are over 28,000 Pooh related items sold within the last 90 days on eBay ranging from plastic guitar picks picturing the bear that cost 15 cents each to a lot with all four first editions minus dust jackets which sold for about $3,082. In addition to books, other Pooh merchandise and collectibles included toys, games, movies, animation cels, art work, clothing, figurines, dishes, decals, patches, pins, stickers, pet supplies and much more.

However abundant and diverse the supply of Pooh books and Pooh related merchandise, the 100th anniversary is a scant decade off in 2026, and by then we can expect the hoopla machinery to be fully engaged. In the meantime, if you’re curious about the points for the first edition a short video titled “Winnie-the-Pooh”: How to identify first edition of the book” posted by Browsers' Bookstore & WikiEdition.com does a nice job of explaining them: www.youtube.com/watch?v=iZbrq8cLEI4