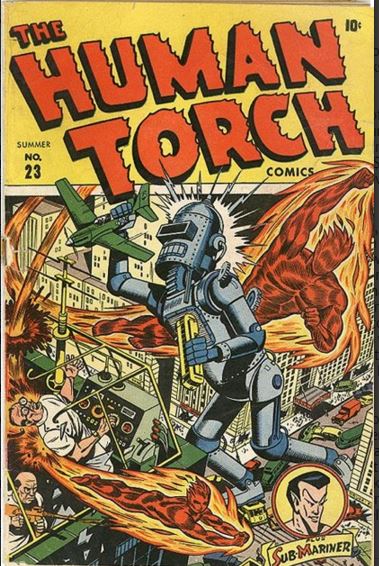 A 1948 The Human Torch was one of the comics stolen from Mr. Marciniak.

Book theft is a crime most foul, but it is generally a genteel crime. Knowing how to quietly dispose of valuable books takes a degree of sophistication not possessed by the typical violent street thief. It more often involves someone slipping out of a library with a few items tucked under an overcoat. Only in murder mysteries do book thefts end up in killings. Such was not the case in 2010 during a theft in the Rochester, New York, area. The killing of the owner of a collection of comic books may not have been an intended consequence, but those intentions were of little comfort to Homer Marciniak. He paid the ultimate price for the thieves' greed, and now they face a serious cost for their actions.

A few weeks ago, the last of eight defendants pled guilty to charges related to the theft and death of the collection's owner. All now have either been convicted or pleaded guilty. Most are still scheduled to be sentenced early this year. The last to plead guilty was Albert Parsons, a 46-year-old former carnival worker who was one of the three who entered Marciniak's home, though not one involved in the physical act of violence. Parsons will be sentenced on April 1.

The FBI and federal prosecutors recently provided a full account of what happened in the early morning hours of July 5, 2010, that led to the tragic event. One Rico Vendetti ran a fencing operation, selling stolen goods online. He had a group of petty thieves who stole merchandise from large stores, such as Walmart, Home Depot, Sears, and JoAnn Fabrics. He would pay his thieves 25 cents on the dollar and sell it for 50 cents on eBay. The FBI reported they stole millions of dollars worth of merchandise from the stores. However, Vendetti became aware that Mr. Marciniak possessed a comic book collection. That would be ideal for selling on eBay for substantial prices.

Marciniak was not a wealthy man. He was a retired janitor, 78 years of age. However, unlike most of us, he kept the comic books he owned as a child, and added to the collection along the way. It has been valued at something between $30,000 and $100,000. Vendetti sent three of his associates to Marciniak's home to steal his comics.

That morning, Parsons, along with Donald Griffin and 17-year-old Juan Javier entered Marciniak's home. Unfortunately, during the burglary, Marciniak, a man with a heart condition, awoke and came out to investigate. For whatever reason, Griffin struck the 78-year-old man in the face. Javier threatened him, and Griffin and Javier tied him up. They then stole the comic books, some cash, coins, and other items, and vacated the place.

Once freeing himself, Marciniak was taken to the hospital where he was treated for facial injuries suffered when he was struck by Griffin. He was released from the hospital, but later that day, suffered a heart attack and died. The FBI reported that prosecutors were prepared to show at trial that the blow from Griffin along with the emotional trauma of the event directly contributed to the heart attack that killed Marciniak. Evidently, blood samples can show that the process leading to the heart attack had begun earlier in the day.

Several of the defendants pled guilty to avoid the more serious charge of felony murder which could have put them away for life. Originally, Vendetti, Griffin, Parsons, and 26-year-old Arlene Combs, who along with Vendetti hired the others to steal Marciniak's comic books, were charged with murder. Vendetti pleaded guilty to racketeering and will be sentenced January 22. So has Donald Griffin, who threw the punch. He will be sentenced on February 3. Seventeen-year-old Juan Javier, who threatened Marciniak and helped tie him up, was tried as an adult and sentenced to seven years in prison. Parsons, who pled guilty to an assault resulting in serious bodily injury as well as racketeering, will be sentenced April 1.

Arlene Combs, who assisted Vendetti in hiring the three who burglarized Marciniak's home, and then accepted the stolen goods from them and passed them on to Vendetti, will be sentenced on February 24 on a charge of racketeering. Terry Stewart, who helped Combs deliver the goods taken by the three to Vendetti, pled guilty to racketeering and was sentenced to 55 months in prison. Two others, Brandon Meade and Dayon Shaver, who were charged with conspiring to traffic in stolen goods across state lines, will be sentenced on January 21 and March 21.