Booksellers Speak in a Recently Released Book – A Book Review 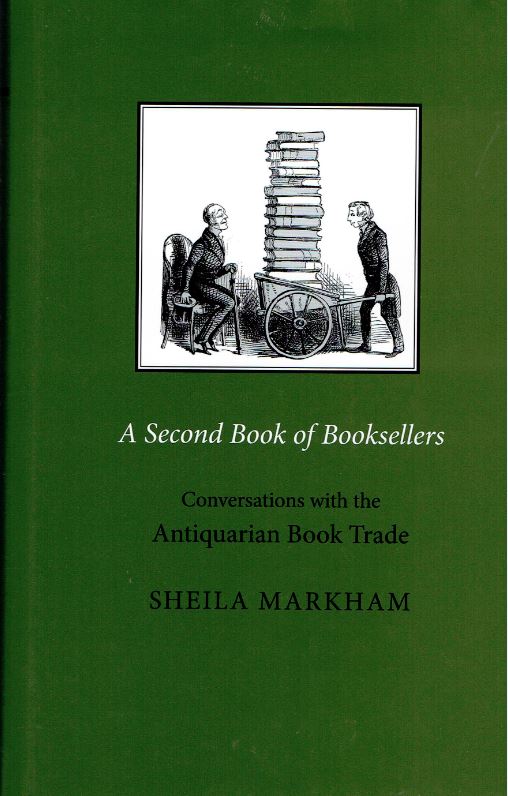 A Second Book of Booksellers.

Here is a book you will want to read if you are a bookseller, collector, or most of all, one of those in between – a collector contemplating a venture into the bookselling field. Bookseller Sheila Markham interviewed a group of booksellers and compiled their responses in A Second Book of Booksellers. This, naturally enough, is a follow-up, but this group has weathered the storm of the greatest transition the field has ever known. If bookselling remained remarkably similar for a century, perhaps a couple of centuries, the past two decades have been anything but stable. The planet has been spinning so fast that book dealers have had to hold on for their lives or be flung from their world.

The booksellers interviewed are all veterans of the trade, of varying lengths. Their careers range from starting in the 1950's to the early 1990's. Some experienced decades of bookselling as it always was, others came in at the tale end of that era. All had to fight their way through the sudden disruption of their way of life brought on by the rapid changes in technology, most notably, the internet. The internet struck earth like a giant meteor and they were dinosaurs. They had only a short amount of time to become birds.

The booksellers interviewed, like Ms. Markham, are mostly English, though a few from other continents do appear (they do have connections to the Isles). It doesn't matter. What they have to say is universal. They recount how they became booksellers, important events in their lives, adaptations they have made, and many give their thoughts on the future and how the field needs to adapt. Their advice is invaluable to anyone in the trade. Their histories are fascinating to collectors and sellers alike, most having become booksellers because of their love of books. This is why we say collectors thinking of becoming booksellers will particularly enjoy this book. So many of these people made that exact transition. Their histories are fascinating and fun to read. Their advice is an education. You won't find many textbooks as entertaining as this one.

While every bookseller's experiences are unique, there is a pattern we see over and over as to how people enter the trade. We suspect it's very different from, say, why people become used car dealers. The future bookseller starts with some connection to books in their youth. Either their parents love or collect books, or they are themselves voracious readers. They develop a connection to books, perhaps build an inexpensive collection of their own. They finish college with some general major that does not lead to obvious jobs, or they don't have sufficient interest in academics to go on to college. Their interest in books leads them to get a part-time or entry level job in a bookstore. They learn the trade, move up to greater responsibilities, and after some number of years, generally with virtually no money in hand, throw their seniority away and break out on their own. We see the progression repeated time and again. Occasionally, we find a book lover who made money in another career take the plunge. Anecdotally, we suspect this route is becoming more common today. Once in awhile, someone enters a family business. Still, for most, they start on a shoestring, with some experience as an employee, a love for books, and not much else.

How they succeed is hard to fathom. Perhaps the biographies we are reading are the exceptions, the few who made it. We suspect that most used car dealers begin, not from a love of used cars, but because they believe there is money to be made in the field. Most of these booksellers, unlike the typical new business owner, seem to be hoping they can somehow survive doing what they love, rather than making a lot of money doing something they think is profitable. How many septic tank cleaners get in the business because they love the trade? Entering the bookselling business rarely appears to be a financial decision. These are really not normal businesspeople. Those who survive so long must be the ones who develop business skills along the way – they are booksellers who become savvy businesspeople, rather than savvy businesspeople who become booksellers.

It's hard to write a review of a book like this because, rather than being a novel, it is a collection of short stories. So, what we will do is collect a few tidbits of wisdom, advice, and experience these booksellers have given us. It hardly scratches the surface. There is so much more, but you need to read the book for all of the rest.

Many booksellers had observations about the internet, and its listing site offspring, AbeBooks. Most use “Abe,” but only in a specific, limited role.

Tony Cox observes, “The internet has made rarities more expensive, and common books cheaper.” He sells online only what does not sell in his catalogues. Peter Budek will put unsold lower priced but still collectible books up on eBay, while lesser material goes on the £1 and £2 shelves.

Of course, the internet has revealed that some “rare” books aren't so rare after all. Peter Scupham wryly observes, “In these days of the internet, there is nothing so common as a rare book.”

Michael Graves-Johnson points out, “It's [the internet] a wonderful medium for buying but hopeless for selling antiquarian books.” Or, as John Windle says, “If you are thinking of spending a thousand or two thousand dollars on a book, would you like to be able to visit a dealer in a shop where he has done business for many years, and can show you different copies of a book, discuss what is available on the market, help to develop your interest in the subject and generally be available for consultation, or would you rather do business with a website that can disappear at the flick of a switch?” I think this is a rhetorical question.

Paul Mills noted that some books have remained listed online for years. “Dealers need to be more nimble in how they sell their books.” He summed up the feelings of many succinctly - “...ABE is not the future.”

What is the future? Many agreed it is with the young. Elizabeth Strong says, “We have to keep trying to get young people to look at books and aspire to own them. This is the role for book fairs and shops...we are not libraries or museums.” Tim Bryars explains, “I am always very welcoming to students who come into my shop and are interested in material they cannot afford to buy. I remember my own student days and how much I enjoyed the opportunity to browse in bookshops.”

John Windle explains it, “The challenge of the book trade is to introduce young people to rare books and foster an appreciation of the importance of books as cultural artifacts.” Tony Cox notes the awestruck reaction of some young people in touching a very old book. “It might not happen to more than one in 10,000, but perhaps the antiquarian book trade doesn't need more than this percentage of the population for its survival.”

Pom Harrington entered the trade from a different vantage point than most. He joined his father's going concern with a business perspective. “Most booksellers are not businessmen first; they're book lovers. They trade in something they love and try to make a living at it.” Harrington emphasizes the importance of informative, accurate descriptions. Prices on the internet vary widely. “We want customers to trust there's a good reason for the price of our books.” Harrington notes he “can't stand” shops where the books are locked up and nothing is priced, like an “old-fashioned library.” Their shop has a “smart appearance, and visitors receive a warm welcome. Everything is priced, catalogued, and guaranteed.” Harrington also has an interesting observation about the electronic reader, a device to throw fear into the hearts of book lovers - “People tell me the Kindle is the end of the book. It's not; it's the end of the paperback.”

Sophie Schneideman notes that while her customers are high achievers, they don't buy for investment purposes. Their passion is seen in their “intimidating” depth of knowledge. “Some of my collectors can tell you what William Morris had for breakfast on a given day.” Larry Ilott points to the importance of describing the book as “an art object.” Edward Baynton-Coward confirms, “I am quite confident that books as objects will not only survive this period of great upheaval, but be held in growing esteem.”

We will give the last word to Alfredo Breitfeld, of Argentina's Libreria de Antano: “I cannot imagine a time when one of my clients will tremble and perspire holding in his hands a first electronic version of Don Quijote de la Mancha. Rare and beautiful books will disappear only if beauty itself disappears from our existence. While humanity still has a soul, the book will remain in its present physical form.” No, we will give one last, counterintuitive final comment to Michael Graves Johnston - “...the future of our trade has never been rosier.”

If you don't find a copy of this book locally (it is a limited edition of 500), you may send your inquiry to sheilamarkham@hotmail.com.