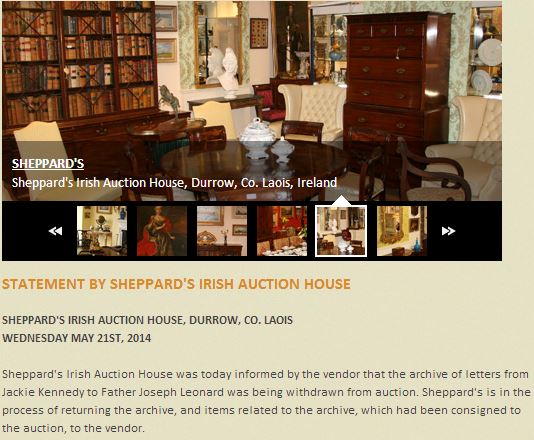 Sheppard's announces that the Kennedy archive has been withdrawn from sale.

The letters have stirred up some controversy. First, an injunction was issued against Mr. O'Neill, the bookseller-appraiser, for Sheppard's Irish Auction House, which was selected to handle the sale. Evidently, Sheppard's believed Mr. O'Neill was making information from the letters available to the press without permission, and representing that he had authority to negotiate a sale. Mr. O'Neill surrendered copies he made of the letters, both physical and electronic, to the court. There seem to be some financial differences between the parties, and perhaps with All Hallows, who it appears had hoped to keep their ownership of the letters quiet. This part is all boring and trivial, but the deeper issue, and perhaps why All Hallows did not want their participation known, is the ethics of revealing the contents of these letters and selling them in a public venue. This is a troubling and difficult issue.

These letters clearly are historically significant, yet it is almost certain Mrs. Kennedy would have wanted them to remain private, and Fr. Leonard would have acceded to her wishes. As to which concern is most worthy to be followed – the claims of history, or the privacy wishes of someone now 20 years deceased – that is a call I am not prepared to make. All Hallows, which can certainly use the $1 million-plus it expects to receive, justified its actions by saying Fr. Leonard and Mrs. Kennedy were not acting in a Priest-Penitent relationship, nor was this a case of confession, since confession can only take place in person. That answer may meet theological-legal questions, but hardly addresses the ethics of revealing and selling these personal letters. It's more of an excuse. Perhaps a discreet sale to the JFK Library would have been far more appropriate and considerate, preserving both history and privacy. That might not have maximized the sale price, but it would have been more fitting treatment for the private, innermost thoughts of a woman who exhibited all of the class that seems to be missing from this transaction.

Addendum: On May 21, Sheppard's posted the following notice on its website: “Sheppard's Irish Auction House was today informed by the vendor that the archive of letters from Jackie Kennedy to Father Joseph Leonard was being withdrawn from auction. Sheppard's is in the process of returning the archive, and items related to the archive, which had been consigned to the auction, to the vendor.” Reportedly, All Hollows was contacted by members of the Kennedy family regarding the planned auction and is now discussing an appropriate way to preserve this archive with the family. Additionally, there are questions of ownership. Fr. Leonard left his estate to the Vincentian Fathers. While the Fathers operate the college, they are not the same. A solution satisfactory to the Kennedys is, in our opinion, a far more suitable conclusion, and we would not be surprised if this results in the letters finding their way to the JFK Library. That is the best ending for this difficult story.

Second Addendum: Two days after the sale was canceled, All Hallows College announced that it would be closing its doors. The canceled sale played a roll, though it may only have been to delay the inevitable. Meanwhile, the Irish Times reported that bookseller O'Neill has said that many items have gone missing from the All Hallows Library, perhaps worth millions of dollars. See the next article in this issue for a follow up to this story. Click here.