How to Get Current Price Estimates from Older Auction Records 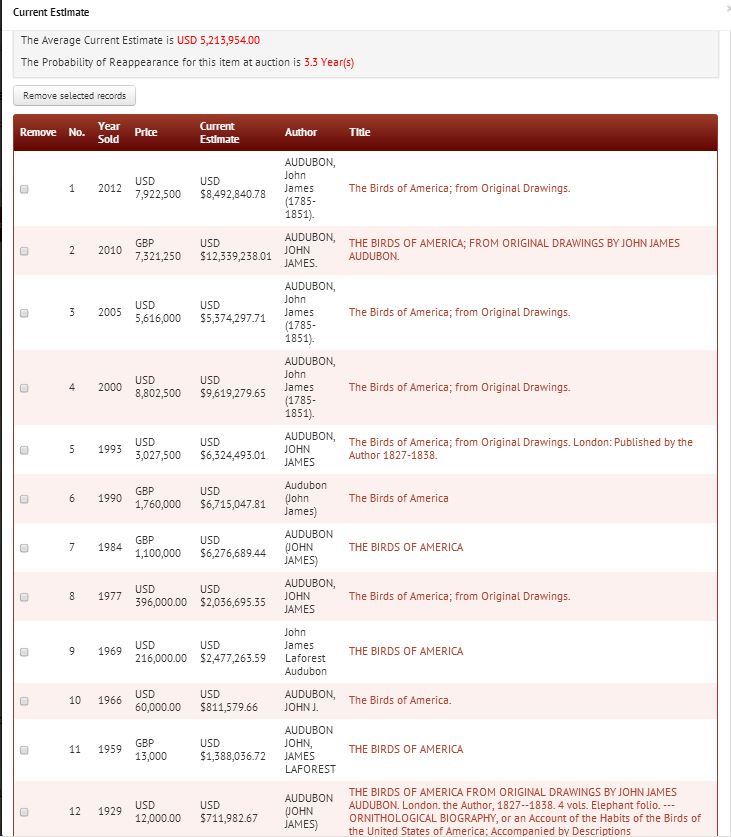 Actual prices and current estimates for the ultra-expensive first edition of Audubon's Birds of America (click to enlarge).

Here is a feature that will help subscribers to the AE Bibliographic Database (or future subscribers) get a better handle on values. The AE Database is a compilation of records, mostly priced auction lots, from the field of books and works on paper. It is now over 5 million records strong, and growing almost every day or two. It is unique.

When you do a search of the AED, you will see a button at the top left, just above the results, that reads “Get Current Estimate.” To get a current estimate, either check those records for which you seek one, or check the box at the top that will check them all. Then click the button. Your current estimates will appear. What, then, is a “current estimate?”

A “current estimate” is a guideline for what older auction prices represent in value in today's dollars. It is not just an indexing for inflation, adjusting yesterday's prices based on the consumer price index or the price of milk. Instead, it adjusts old prices based on the rate of inflation (or deflation) in the price of books over time. That is where the 5 million database records come in. They have been used to compute median prices for years as far back as 1914. That has enabled us to calculate something of a consumer price index for books, rather than groceries or housing or some other unrelated commodity.

Now this is going to be an estimate, as perfection is not possible. It will take an old price and calculate an estimate based on the appreciation of a typical book, but not all books are equal. Just as all elements of the consumer price index have not appreciated at equal amounts, so have books appreciated at different rates. In general, the old adage that “the rich get richer” is true of books too. The most valuable books generally appreciate more than average. Books by authors once in greater favor than they are today may appreciate more slowly, if at all. If more recent auction prices are higher than estimates for older ones, that is a sign of above average appreciation. That book may also be an above average investment going forward. One where recent sales are below estimates from older sales may indicate a book losing favor. You may want to be more cautious in what you pay for a book in this category than one appreciating faster than average.

The Get Current Estimate feature also translates prices in other currencies to U.S. dollars so all records can be compared. Conversions are made using exchange rates at the time of sale (not current exchange rates) for accuracy in estimates.

Here are two more numbers you will see when you get a current estimate:

1. Average Current Estimate. This computes the average current estimate of all the records you have selected. For this to provide a reasonable estimate, you need to make sure you have only selected apples, not oranges. In other words, if you get the estimate for a particular title, but it includes a mix of first and later editions, some signed copies, etc., though each individual estimate will be reasonable, averaging them together will not. You need to select only comparable copies and eliminate the rest to get a solid average estimate.

2. Probability of Reappearance. Here is another useful feature, but as with average current estimate above, you need to select only comparable records. This formula looks at how often the book has shown up at auction in the past and computes roughly how often it can be expected to show up in the future. The formula is weighted to more recent results as books which may have shown up frequently a half or even a century ago may have mostly disappeared from the market today. This can be very helpful in determining whether to buy a copy of a book. If it appears at auction every year or two, or maybe multiple times per year, there is little need to chase a copy that is more than fully priced. If it is a book you seriously want, but it appears rarely on the market, perhaps only once every five, ten or more years, you may want to be more aggressive in your pursuit of a copy now being offered. You may have to wait a long time for another chance.

Those of you who are already using this feature may have noticed current estimates rose recently. The median price of books rose 7% last year, so older prices have had their current estimates raised by this amount to reflect the recent upward trend in prices. However, they have not yet caught up with prices prior to the recession of 2008. You will still find current estimates lower than actual prices paid during the years 2004-2007, with the largest drop being from prices in 2007, the year before the big recession.