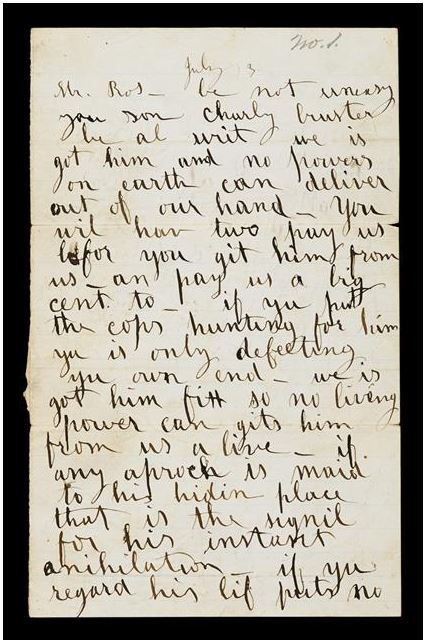 A piece of criminal history was sold at the annual Pennsylvania sale at Freeman's Auction in Philadelphia last month. It included the most important documents in one of the most sensational cases of the 19th century, albeit somewhat forgotten today. It was the case of 4-year-old Charley Ross, the first victim of a kidnapping for ransom. Whatever happened to poor Charley remains a mystery today.

This story begins on July 1, 1874. Little Charley and his 6-year-old brother Walter are playing in their front yard in the Germantown section of Philadelphia when two men stop by. The men offer candy and a promise to take them to a fireworks shop. July 4th is just around the corner. The boys agree to get in their “getaway car,” which in 1874, of course, is a horse-drawn buggy. They ride off for the city. Little Charley gets a bit antsy after awhile, but the men stop at a fireworks store as promised. They give Walter a quarter to go inside to buy some fireworks. This Walter does, but when he returns, the men, the buggy, and Charley are gone. Charley would never be seen again.

The boys' father, Christian Ross, thought they were playing at a neighbor's house. As day dragged on to evening, he became concerned and began looking. There was no trace of the boys. Christian placed an ad in the paper. Missing persons issues were handled differently then. He didn't tell his wife immediately as she was off in Atlantic City, recuperating from an illness. He didn't want to concern her.

Two days later, a stranger who had found Walter brought him home. That is when Christian learned the complete story. Meanwhile, a ransom note arrived at the house. It was crude, filled with misspellings and bad English, but the message was clear. The kidnappers wanted $20,000 and they threatened terrible harm to the child if Christian went to the police. The note read:

Mr. Ross- be not uneasy you son charly bruster he al writ we as got him and no powers on earth can deliver out of our hand. You wil hav two pay us befor you git him from us. an pay us a big cent to. if you put the cops hunting for him yu is only defeeting yu own end. we is got him fitt so no living power can gits him from us a live. if any aproch is maid to his hidin place that is the signil for his instant anihilation. if yu regard his lif puts no one to search for him you money can fech him out alive an no other existin powers don't deceve yuself and think the detectives can git him from us for that is one imposebel yu here from us in few day.”

Germantown was a wealthy section of town, and the Rosses lived in a large house. The kidnappers likely assumed they must have a lot of money. They didn't. They had once been fairly wealthy, but Mr. Ross lost a lot of money in the Panic of 1873 with the result being he was now heavily in debt. He was unable to come up with $20,000, an enormous sum of money in those days. So instead he disobeyed the kidnappers' demand and went to the police.

In time, more ransom notes arrived, money was raised, and attempts were made to pay the kidnappers with marked bills in distant places - New Jersey and New York. The kidnappers never came for the money. Rewards were offered, time went by, but nothing happened. However, in New York City, the Police Superintendent became aware that the handwriting on the notes resembled that of one William Mosher, a small-time thief with a distinctive, deformed nose. Mosher's brother-in-law was William Westervelt, a sometime policeman. Westervelt attempted to collect the reward money, but also tipped off Mosher so the latter could remain out of sight.

A break finally came in the case in December when two men broke into a summer home belonging to a judge on Long Island. The Judge's brother lived next door, and along with a couple of other family members, grabbed some shotguns and went next door. Gunfire broke out, and when it was finished, William Mosher lay dead on the floor. His partner, Joseph Douglas, was mortally wounded. Douglas lived long enough to say a few words. He admitted responsibility, but placed most of the blame on his partner. He also said Charley Ross was fine and would be released in a few days. Then he died. Ross was never released, nor his location revealed. Charley's brother Walter was brought to New York to view the bodies, and he identified them as the two men who had kidnapped him and his brother back in July.

The outcome was frustrating. Charley could not be located and the kidnappers could not be tried. However, they did put Westervelt on trial. There just wasn't much evidence to connect him to the kidnapping. Walter viewed Westervelt too and said he was not a participant. Westervelt was acquitted. He was convicted on the lesser count of conspiracy and served six years in prison. Westervelt repeatedly proclaimed his innocence.