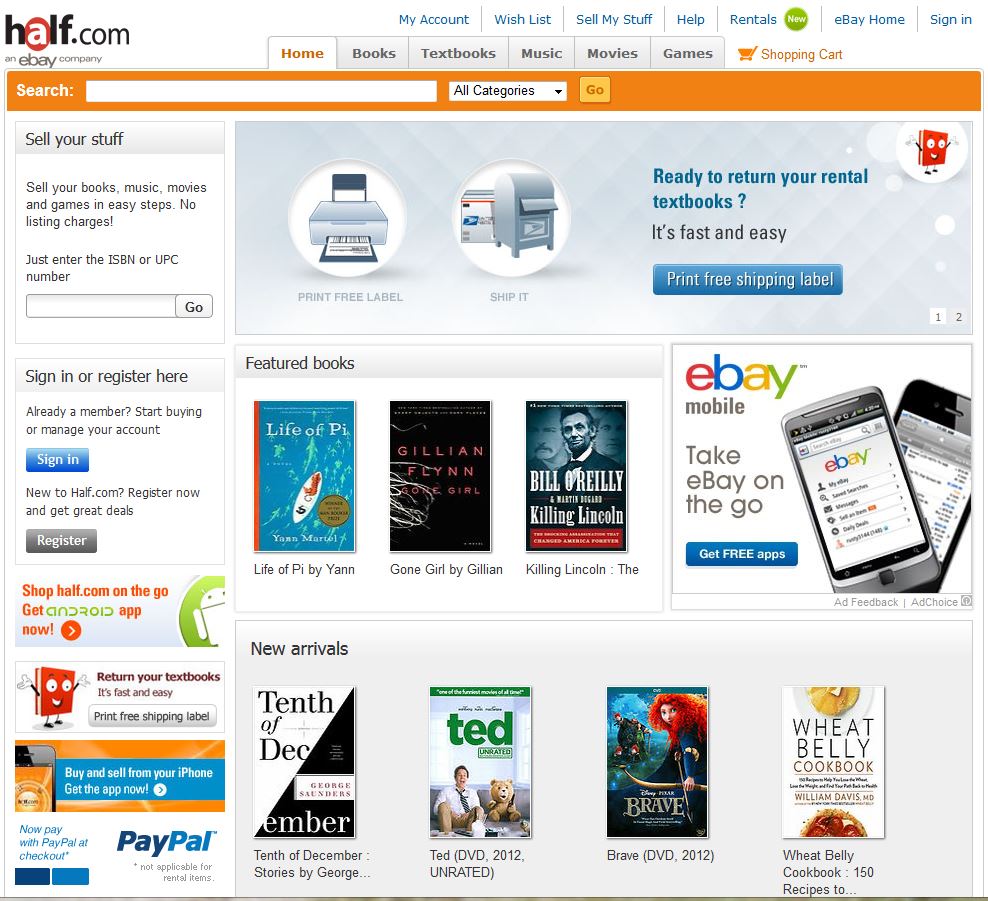 Half.com – still selling books after all these years.

A Massachusetts resident pleaded guilty to stealing over $600,000 worth of books, audiobooks, and legos, and selling them online at Half.com. Half.com? Didn't they go out of business ten years ago? No, they did not. Despite announcements back then that the site would be closed by its owner, the more popular eBay.com, they later changed their mind, and the site continues after all these years. It retains a loyal following. You won't find it online at “half.com” any more, but if you enter that web address in your browser, it will forward you to its current location, half.ebay.com.


According to the U.S. Attorney for Massachusetts, John C. Strang, a 67-year-old gentleman from Burlington, pleaded guilty to shoplifting from stores in Massachusetts and New Hampshire. Barnes and Noble and The Paper Store were listed as among his targets. In a statement from the Attorney's office, it was reported, “In total, Strang stole tens of thousands of items, with a total retail value of at least $600,000. He then sold them online at Half.com, an Ebay subsidiary, using the name 'booksgoodtome.' Strang listed the stolen items at prices which were typically 40-50% of their retail prices. Strang then sold and shipped the stolen merchandise to purchasers throughout the United States. He routinely received payment of more than $2,000 every two weeks from Half.com.” When your cost of goods is zero, you can afford to sell at very sharp discounts.


Sentencing has been scheduled for October 15, with the maximum penalty being ten years in prison and a $250,000 fine.


Getting back to Half.com, the online bookseller was purchased for around $350 million by eBay in 2000. Considering it was less than a year old at the time, that was a pretty good price for its founder. Not even Mr. Strang did that well off of Half. Ebay was still overwhelmingly an auction site then and was interested in getting into more fixed price selling, a trend that has continued ever since. Nevertheless, by 2003, eBay had announced it would be shuttering the site. That is not to say they regarded the purchase as a waste. They had already incorporated many of its features into their own site, and felt the fixed price sales of books could best continue on the eBay site. However, many of Half.com's sellers and buyers objected, and eBay relented. Half has been traveling somewhat under the radar ever since, but obviously it must still be doing a substantial business, as eBay would not maintain it for old time's sake.


The site likely has been forgotten by most antiquarian dealers as it requires an ISBN number to post books for sale. Gutenberg never thought to put an ISBN number on his bible. Indeed, no books printed before 1965 contain an ISBN number. This really crimps Half.com's usefulness for antiquarian booksellers.


Nevertheless, Half.com remains a useful site for trading in more recent used books. It does retain one “antiquarian” practice for the two-decade old business of selling books online. It still doesn't charge listing fees. Remember the good old days? You can still post your ISBN books on Half.com and not pay a penny until/unless they sell. There is a sliding scale commission structure. It ranges from 15% on books priced $50 and under to 5% on books priced over $500. Half.com is also in for a part of the shipping fee and just this year eBay finally got around to extending its PayPal payment service to its bookselling subsidiary. Payments are made to sellers every two weeks, and as Mr. Strang can attest, there are enough customers on Half.com to make that a potentially significant amount, like $2,000 every other week.