Manuscript of Beckett's First Novel to be Sold July 10 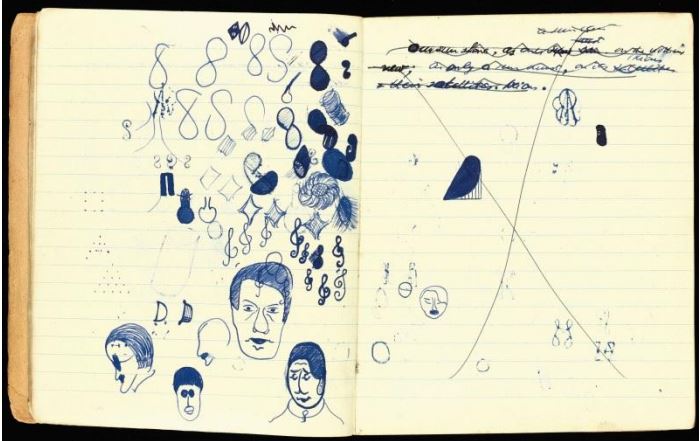 “The sun shone, having no alternative, on the nothing new.” With that happy introduction, we can report what Sotheby's describes as “one of the most important 20th century literary manuscripts in private hands” will be on the block July 10. It is the original manuscript for Samuel Beckett's first novel, Murphy, from which that is the opening line. It was not his first attempt at an opening. The manuscript reveals at least eight other versions were written before Beckett settled on the final one.

Murphy was published in 1938, but the six exercise books containing this manuscript were written from August 1935 through June 1936. Beckett was born and raised in Ireland, and still lived there while he wrote this Dublin/London-based novel. Soon thereafter, he headed for Europe, eventually settling in Paris. In his early days, Beckett came under the influence of another great Irish writer, James Joyce. He worked for Joyce awhile, doing research for him. However, by the time he began work on Murphy, he was off on his own developing his own style.


According to Peter Selley, Senior Specialist in Books and Manuscripts at Sotheby's, “This is unquestionably the most important manuscript of a complete novel by a modern British or Irish writer to appear at auction for many decades. I have known about the existence of this remarkable manuscript for a long time – as have a number of others in the rare book business, and some Beckett scholars – but it has only been glimpsed, tantalizingly, by a few chosen individuals during that time.” Even Godot would have waited for this one to come to market.


We will not recount the plot of this novel lest we spoil it for you, but the protagonist lives in a strange world with strange people. Perhaps this is what life was like in Dublin and London at the time, though we seriously think not. What we do know is that it took Beckett a while to get it right as the manuscript is full of hand changes and corrections. This manuscript will be of as great interest to scholars as it is to collectors. As Mr. Selley points out, “The manuscript is capable of redefining Beckett studies for many years to come.”


It is also filled with doodles and drawings made by Beckett, those markings we all made on paper (in the pre-word processing era) when we experienced writer's block. Among the recognizable “portraits” in his notes are those of Joyce, Beckett himself, and Charlie Chaplin. Chaplin would be an inspiration for the tramps that later appeared in Godot.


Speaking of Mr. Beckett's mentor, James Joyce, a most interesting Joyce item sold at a Sotheby's auction on June 11. It is one of apparently only 20 copies of the first pressing of a record of Joyce reading a selection from Ulysses. This is, so to speak, an early rap record. Joyce was cool. Naturally, only a small selection of Ulysses could fit on an old 78. The label is that of Shakespeare and Company, the legendary Paris bookseller that had this recording made. Proprietor Sylvia Beach later noted the number of copies made, though most had disappeared by then. Sotheby's believes that only two or three unbroken copies survive, with a few broken ones also around. The record is signed and dated by Joyce, November 27, 1924. Against an estimate of $15,000 - $20,000, the record sold for $43,750.