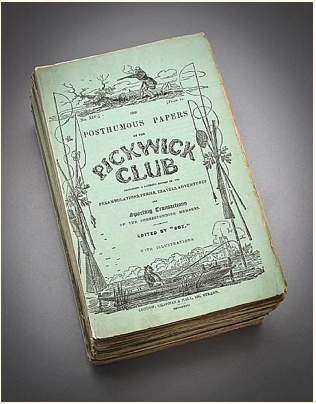 The Posthumous Papers of the Pickwick Club

On Tuesday October 18th at Bohhams in New York and simulcast to Los Angeles The Robert H. and Donna L. Jackson Collection of 19th Century Literature [Part I] will be held.  For the Jacksons who have built and sold many collections over the past thirty-five years this is the first to be sold at auction.  Bob is the restless acquirer and Donna his co-conspirator.  Their collections are so substantial and ever changing that a second library to their home in Ohio was added twenty years ago.  They barely contain the material but cannot contain the enthusiasm that Bob, at 74, effervesces for books and collectibles.  To the question recently asked, what is next he said “I’m open to suggestions.”  There will be several next collections.  While the man breathes he buys, often with stunning success.  His collections have been objects of passion.


Over the decades Bob has built many book collections, most related to fiction, most later gifted and a few sold to institutions and private collectors.  His collections begin with the premise that completeness can be achieved.  He then nurses them to life, envelops himself in the material and when they achieve ‘completeness’ moves on.  He dates his serious collecting to the purchase of Eugene O’Neill material from the Goodwin Collection, at auction, in the late 1970s.  Thereafter, in short order he began to collect Aldous Huxley and the printed material and art of Rockwell Kent.  In 1980 he purchased a collection of William Burroughs, the beat poet that was later sold to Arizona State.  He has also collected Virginia Wolfe and Vita Sackville West and continues to fan the embers of another half dozen promising subjects.  Most collectors in the field collect subjects.  Bob collects collections.